Editor’s note: Eric Doppelt’s admiration for his aunt, a pancreatic cancer survivor, was the reason he attended his first Advocacy Day last year. This story was originally published last year, but because it’s a story about love, we wanted to share it again this February. 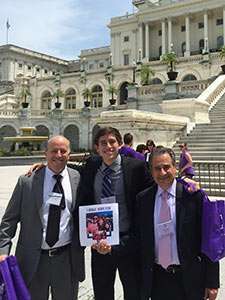 Eric Doppelt (center) with his dad, Harvey (left), and his uncle, Eugene Negrin, in front of the U.S. Capitol at Advocacy Day 2015.

It was time to tell his story.

He breathed in deeply, stepped forward confidently, and with conviction and fortitude, told the legislative staffer in Sen. Chuck Schumer’s Washington, D.C., office why he was on Capitol Hill that sunny day in June 2015 along with more than 500 other advocates from around the country.

“Too often people aren’t aware of pancreatic cancer, so not enough is being done to stop it,” he said. “I attended Advocacy Day for the first time this year to help change that. I wanted to share my personal connection to pancreatic cancer to encourage more federal funding for cancer research and to make a difference in the lives of everyone affected by this disease.”

Eric is only 15 – a rising sophomore. There with his dad and his uncle, he was one of the youngest in the group of N.Y. residents visiting their senator’s office to share their stories.

Eric’s is about his best friend, confidant and partner in crime. It’s about his Aunt Jane, who was diagnosed with pancreatic cancer in 2013 and is in treatment again after having had the Whipple surgery and rounds of chemotherapy two years ago. Though she and her doctors remain optimistic, it has been a hard-fought battle.

Unfortunately, stories like Eric’s are common at Advocacy Day, but participants have the opportunity to Wage Hope and find a sense of camaraderie there. Each year, hundreds of volunteer advocates from around the country make the trip to Capitol Hill to tell their members of Congress why more federal funding for pancreatic cancer research is important to them – and why it’s critical to making progress against the disease. All of these voices carrying the same message never fail to have an impact. This year, the week after Eric and other advocates were at Advocacy Day, the House of Representatives passed the 21st Century Cures Act, which would provide a mandatory increase in National Institutes of Health funding. Advocates are focusing on getting the Senate to take action on a similar bill today. 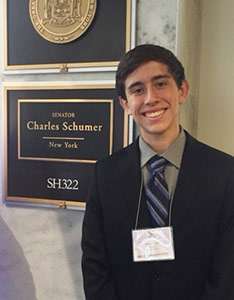 Eric Doppelt, 15, traveled to Washington, D.C., in June for National Pancreatic Cancer Advocacy Day to speak with members of Congress about why pancreatic cancer research funding is important to him.

For Eric, being on the road advocating for his aunt and the thousands of others affected by pancreatic cancer is not new. This past spring, before the snow had entirely melted across the Northeast, he, his parents, other family members and friends participated with Team Jane in PurpleStride® 5K walk/run events in New York City, New Jersey, Delaware and Chicago. Team Jane also enthusiastically rallied at PurpleStride San Francisco, where more of the Doppelt family lives. In total, nearly $16,000 was raised for the Pancreatic Cancer Action Network through Team Jane participation at these events.

If Eric were to impart one piece of advice for others trying to inspire generosity or interest in the cause, it would be this: Don’t be embarrassed to share your story.

“When people hear why I’m involved, they say, ‘It’s the coolest thing you’re doing.’ And my aunt always tells me she’s inspired – that even on her worst day, knowing that we’re all behind her boosts her spirits. That gives me even more motivation to keep going.”

For Jane Negrin, her devoted nephew IS her motivation.

“That Eric chose to honor me by becoming so involved with the Pancreatic Cancer Action Network … I’m very touched,” she said. “He is a wonderful person – he’s that great combination of being able to have fun with a twinkle in his eye, but also very committed to taking certain things in life seriously. He’s a great friend … not to mention a good prankster – we have a lot of fun together.”

Stories of their friendship and good memories of his aunt are always with Eric. Since he was born, she has been there for him.

For example, there was the time years ago that Negrin babysat Eric and his older brother. She told them, “You can do whatever you want today!”

What Eric wanted was to eat a whole tub of ice cream by himself. 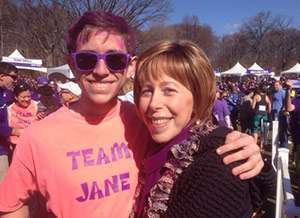 Eric Doppelt’s beloved aunt, Jane Negrin, is fighting pancreatic cancer. He rallied friends and family to be part of Team Jane at several PurpleStride events in the spring and will do so again next year.

“That’s one of my earliest memories of her,” he said. “And that was a GREAT day.”

Today, he recalls his time at Advocacy Day – emotional though it was – as a great day, too.

“It was life-changing. It was overwhelming to be surrounded by people I had never met while opening myself up and sharing my aunt’s story. Never before in my life have I felt so supported. Everyone was looking out for each other. Everyone understood each other’s pain. That every single person around me had been touched by this cancer was staggering. But I’m so fortunate to have been there. I met so many wonderful survivors. Hearing each and every one of their stories was something I will always remember.

“Knowing I made a difference by asking for more federal funding still fills me with pride. It was awesome to see Capitol Hill blanketed in purple by all of us, and I know the friendships we made will last forever.

“Already, I can’t wait for next year!”

For him, for Aunt Jane, it’s important to keep the momentum going.

In fact, among Eric’s favorite quotes is one by Martin Luther King, Jr., which he said sums up his attitude and is undoubtedly the way many feel who Wage Hope every day in the fight against pancreatic cancer: