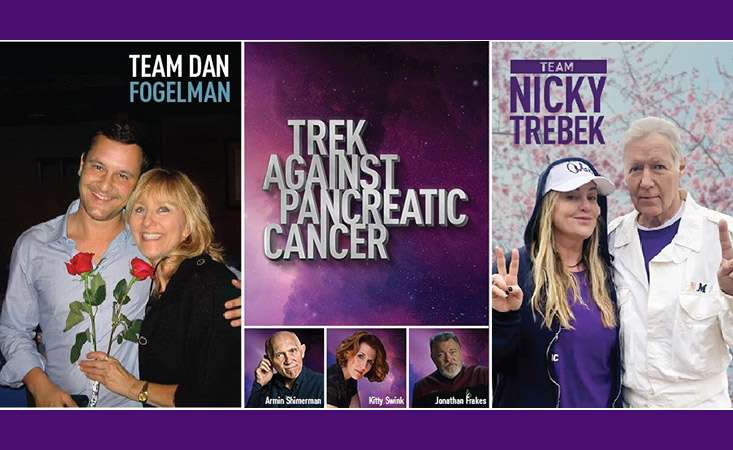 LOS ANGELES, Calif. – (April 27, 2021) – The Pancreatic Cancer Action Network (PanCAN) announced three all-star celebrity teams, all who have a personal connection to pancreatic cancer, are joining together to participate in the organization’s biggest fundraiser, PurpleStride, the walk to end pancreatic cancer. This year, the goal is to raise $10 million for the nonprofit. Nicky Trebek, “This is Us’” Dan Fogelman, and “Star Trek” stars Jonathan Frakes, Kitty Swink and Armin Shimerman, are all joining the fight as team captains for PurpleStride Los Angeles in an effort to raise awareness and funds to support life-changing programs and services for pancreatic cancer patients and their families. Funds raised provide patients with free, personalized information, services and resources that make a real difference in their lives. To register for free, donate, or learn more about PurpleStride Los Angeles, which takes places on Saturday, May 1, visit purplestride.org/la.

Pancreatic cancer is one of the deadliest cancers with a five-year survival rate of just 10 percent. In 2021, more than 60,000 Americans will be diagnosed with pancreatic cancer and approximately 48,000 will die from the disease, making it the third leading cause of cancer-related death in the U.S. PurpleStride is a year-round national event and is the number one-way PanCAN raises money to fight pancreatic cancer.

Honoring her father, the late, beloved Alex Trebek, Nicky Trebek formed “Team Nicky,” already raising over $10,000 toward her goal of $22,222. Star Trek stars Kitty Swink, who is a 17-year pancreatic cancer survivor, Armin Shimerman, Kitty’s husband, and Jonathan Frakes, who lost his brother to pancreatic cancer, launched Team Trek Against Pancreatic Cancer, raising nearly $35,000 since March. “This is Us” writer and producer, Dan Fogelman, who lost his mother to the disease, has recently joined the race with “Team Dan Fogelman” and so far, has raised more than $11,000.

“Participating in PurpleStride virtually means you can join from anywhere and what a wonderful way for our community to come together for such an important cause,”  said Julie Fleshman, JD, MBA, president and CEO of PanCAN.  “I am exceptionally grateful to our celebrity team captains for helping raise awareness, and to everyone who is rallying behind our efforts in the fight against pancreatic cancer.”

“As a 17-year survivor, I know how lucky I am,” said Swink. “I feel it is my job, my honor to help anyone I can to fight this disease. If we join together we can change the course of pancreatic cancer.” She added, “I am overwhelmed by the level of support we have received. I don’t know any group of people that is more generous than the Star Trek family, nor anyone who believes more in science and the hope it brings. I am optimistic we can unite to create a better future. Let’s make it so.”

“I am thrilled to honor my father by participating in PanCAN’s PurpleStride Los Angeles this year,” said Trebek. “I’m doing it again this year to carry on what my dad and I did at PurpleStride in 2019; to raise awareness and foster hope for so many others struggling with this disease. When my dad announced to the world that he had been diagnosed with pancreatic cancer, he concluded with the powerful words, ‘We’ll get it done.’ I am exceptionally proud to be a part of a movement that is helping to carry out that wish.”

PurpleStride is virtual this year meaning anyone can participate and stride in their own meaningful way.  People are invited to join one of the celebrity teams—or create their own team-- and make a difference in the fight against this disease. They can bike, swim, bake, play games--and even take a walk in the neighborhood. They can also find one of 20 PurpleStride “Selfie Stations” located throughout the LA area which are perfect for posing in front of and posting on social media to share the passion for fighting the disease. Remember to remain socially distanced and wear a mask, tag @PanCAN and use the hashtags #JoinPanCAN and #PurpleStride.