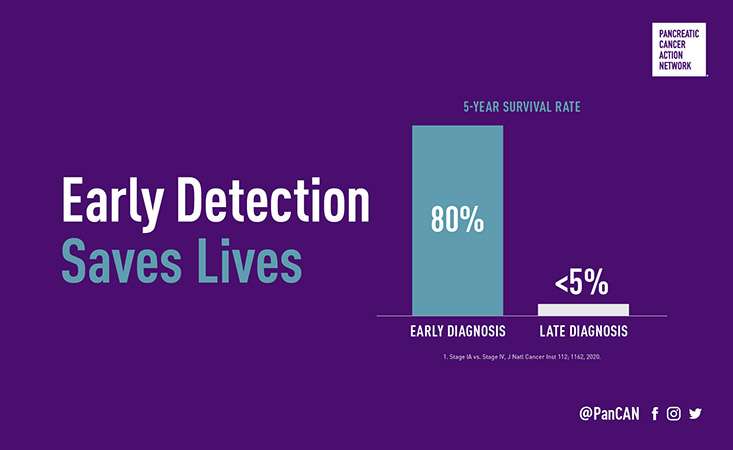 Pancreatic cancer is the third leading cause of cancer-related death in the U.S. and has one of the lowest survival rates of all cancers with just 10 percent of those diagnosed surviving five years or more. Because symptoms are often vague and mimic other illnesses or conditions, most patients are diagnosed when they are already in the late stages of the disease. Finding a pancreatic tumor early when it can be surgically removed is critical for survival.

Currently, there is no standard screening test, like a mammogram or colonoscopy, to detect pancreatic cancer early. While we know that risk factors such as having a first-degree relative or certain gene mutations may increase the likelihood that someone will develop pancreatic cancer, recent research also indicates that in a small portion of individuals who develop diabetes over age 50, their diabetes is actually an early symptom of pancreatic cancer. PanCAN’s Early Detection Initiative will focus on this population, looking at changes in their blood sugar and weight, and the relationship between the development – and early detection – of pancreatic cancer.

“The ability to identify high-risk groups to screen for pancreatic cancer has been a top priority for PanCAN and the research community for many years,” said Julie Fleshman, JD, MBA, president and CEO of PanCAN. “This initiative is an ambitious undertaking and significant investment for PanCAN and we are hopeful that the results of this study will lead to an early detection strategy for this disease.”

PanCAN is investing $25 million in this study and also collaborating with the National Cancer Institute (NCI) and an expert team of researchers, clinicians, statisticians, and diagnostic specialists from across the country. PanCAN began developing the Early Detection Initiative in 2018 and the protocol received Institutional Review Board (IRB) approval in 2020.

PanCAN’s Early Detection Initiative is a randomized controlled trial. Eligible participants will be identified through electronic medical record systems at participating institutions with the intention of finding patients at the earliest indication of diabetes. Only people identified through their institution’s electronic medical records will be able to participate in the study.

In addition to imaging tests for eligible patients who consent to participate in PanCAN’s Early Detection Initiative, blood samples will be also collected. The blood samples will be pooled with specimens collected through the NCI’s New Onset Diabetes Study in order to search for blood-based biomarkers to indicate the early presence of pancreatic cancer. The ultimate goal will be to inform current clinical guidelines to develop a screening approach that will allow doctors to catch pancreatic cancer sooner in a subset of patients.

“We are pleased to work with PanCAN on this important effort to better understand the connection between new onset diabetes and pancreatic cancer,” said Norman E. “Ned” Sharpless, M.D., director of the NCI. “Our hope is this collaboration will lead to new opportunities for early detection of pancreatic cancer that have a meaningful impact on the lives of patients.”

PanCAN takes a comprehensive approach to increasing survival through its groundbreaking, large-scale research initiatives that seek to detect pancreatic cancer early and create better treatment options. In October it launched Precision PromiseSM, an adaptive clinical trial that is now enrolling patients in 15 world class cancer institutions with the goal of getting new and better treatments approved more quickly. Since 2003, PanCAN has invested approximately $126 million in pancreatic cancer research. This year alone, despite a global pandemic, PanCAN will invest a record $23 million toward its research initiatives. This investment is only made possible by the support of generous donors.

To determine if you may be at an elevated risk of developing pancreatic cancer, take our Risk Assessment Test here.