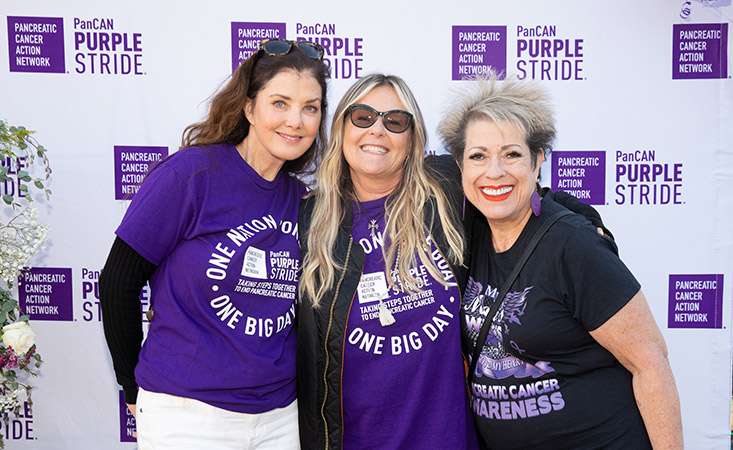 Celebrities, Survivors, Caregivers, and Supporters Join Forces on One Big Day to Raise Awareness and Critical Funds for the World’s Toughest Cancer

LOS ANGELES, Calif. (April 30, 2022) – Today, the Pancreatic Cancer Action Network (PanCAN) hosted its largest annual fundraiser, PanCAN PurpleStride, the ultimate event to end pancreatic cancer. For the first time ever in the organization’s history of PurpleStride fundraising events, the campaign rallied local efforts into one nationally synchronized day. From Los Angeles to New York City, supporters in nearly 60 communities walked the nation in solidarity to raise national awareness and much-needed funds for pancreatic cancer. Across the country, nearly 60,000 participants including pancreatic cancer survivors, loved ones and notable VIPs are fundraising to reach an ambitious goal of $16.5 million to fuel PanCAN’s mission to create a world in which all pancreatic cancer patients will thrive.

“PanCAN PurpleStride is the number one way we raise funds to advance progress against this disease and improve the lives of everyone impacted by pancreatic cancer,” said Julie Fleshman, JD, MBA, president and CEO of PanCAN. “One of the most special parts of today is this incredible community coming together, supporters, volunteers, survivors, researchers, and healthcare professionals.  In my 22 years with this organization, I continue to be amazed by the immense outpouring of support for our mission from people and organizations across the country.”

“I was blown away by the passion and drive of those helping to end this disease and touched by the stories I heard from survivors and loved ones,” said Kaling. “Thank you PanCAN for hosting such a special event to bring this community together.”

In addition to Kaling, celebrity guests at PurpleStride Los Angeles included Jean and Nicky Trebek, widow and daughter of the late Alex Trebek, actor Rosario Dawson, striding in honor of her father who is currently battling pancreatic cancer, actor Josh Stamberg, who walked in memory of his father, and “Star Trek” actor Kitty Swink, an 18-year pancreatic cancer survivor.

PanCAN PurpleStride is generously supported by national sponsors, Ipsen, AbbVie and Immunovia, Inc. For more information on the Pancreatic Cancer Action Network and its urgent mission to save lives, visit pancan.org or follow PanCAN on Twitter, Instagram and Facebook.