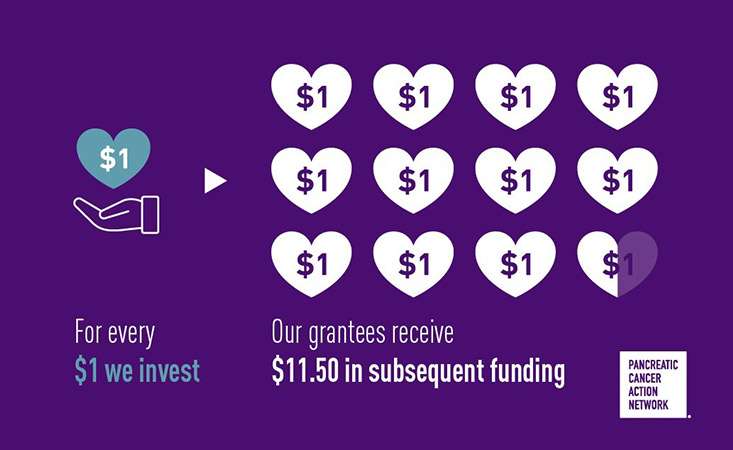 Recent Evaluation Of Grants Program Found Researchers Go On To Receive Average Of $11.50 For Every $1 Invested By PanCAN

LOS ANGELES, Calif. (July 14, 2021) – The Pancreatic Cancer Action Network (PanCAN), a leading nonprofit in the fight against pancreatic cancer, announced today the recipients of its 2021 research grants and grant extensions. This year, 11 grants are being newly awarded and two previously funded grants are being extended. Combined with its investment in leading-edge scientific and clinical initiatives, PanCAN’s total research investment in fiscal year 2021 is $22 million, with nearly $3 million allocated to the Research Grants Program. This brings PanCAN’s total projected research investment to more than $149 million to date.

“At PanCAN, we recognize that research is critical in the fight to improve outcomes for pancreatic cancer patients, and we will continue to invest significant dollars into this arena to support and build the research community,” said Julie Fleshman, JD, MBA, president and CEO of PanCAN. “Thanks to the support of our generous donors, we are proud to be funding so many innovative research projects this year.”

The following researchers are recipients of PanCAN Early Career Development Awards and Fellowships this year:

Additionally, the following researchers are recipients of PanCAN Research Project Grants, with a focus on early detection and improving diversity and equity in understanding pancreatic cancer genetic risk factors:

Finally, along with the new 2021 funding, PanCAN and its scientific reviewers have also awarded two targeted grant extensions to previously funded investigators to continue their highly promising projects. Extension recipients include:

Of the newly awarded grants, this year’s recipients include 10 first-time PanCAN grantees and two new institutions. All grantees and extensions were selected through a thorough, peer-review process.

The seven Career Development Award and two Fellowship grants awarded this year support projects led by early-career researchers, helping them further establish themselves in order to secure funding from other sources in the future. In a recent evaluation of PanCAN’s Grant Program, which looked at grants awarded between 2003 and 2019, PanCAN Career Development Awardees go on to receive an average of $31.23 in subsequent pancreatic cancer research funding for every dollar PanCAN has invested in them. Awardees across all PanCAN grant types go on to receive an average of $11.50 in subsequent funding for each dollar PanCAN has invested (up from $11.01 in 2015 when the last grants program evaluation took place). Additionally, PanCAN grant funding during the evaluation period has resulted in more than 2,700 scientific publications and those publications were cited more than 260,000 times.

“The regular evaluation of our grants program is important to ensure we are investing the funds of our charitable donors wisely and strategically,” said Lynn Matrisian, PhD, MBA, chief science officer at PanCAN. “These results clearly demonstrate the productivity of the investigators and the scientific impact of the research we have funded.”

Since 2003, PanCAN’s grants program has awarded 218 grants to 203 scientists at 75 institutions. Beyond research funding, grant recipients also gain access to PanCAN’s Community for Progress, a cohesive network of researchers focused on improving pancreatic cancer patient outcomes through mentorship and collaboration.

As the third leading cause of cancer-related death in the United States and with a five-year survival rate of just 10%, pancreatic cancer demands urgent action to save lives. There is currently no early detection test for pancreatic cancer and few effective treatments are available, therefore the ongoing funding of innovative research is crucial to solving this challenging disease.