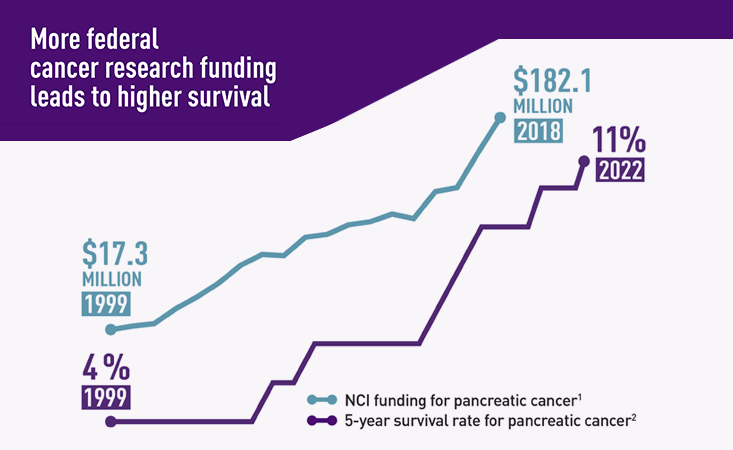 LOS ANGELES, Calif., (June 13, 2022) – When federal funding for pancreatic research increases, so does the five-year survival rate. That’s why the Pancreatic Cancer Action Network (PanCAN), the leading pancreatic cancer patient advocacy organization, is mobilizing thousands of pancreatic cancer survivors, caregivers, and advocates from across the country this week to urge their members of Congress to increase the federal research investment for the world’s deadliest cancer. This year’s asks are to increase the investment in the dedicated Pancreatic Cancer Research Program at the Department of Defense (DOD) from $15 to $20 million and secure $49 billion for the National Institutes of Health (NIH) base budget, including $7.76 billion for the National Cancer Institute (NCI).

Pancreatic cancer is the world’s toughest cancer and is on track to become the second leading cause of cancer-related death in the United States. It demands urgent action to save lives. Given few effective treatments and no early detection method, research funding continues to be critical in the fight against this challenging disease — and approximately 80% of funding comes from the federal government.

The good news is, thanks to PanCAN and its advocates, the federal research investment in pancreatic cancer at the NCI has steadily grown over the last two decades. In 1999, when PanCAN was founded, the investment was just $17.7 million. By 2018 (the latest data available), it had grown to $182.1 million. This funding has had a significant impact on the five-year pancreatic cancer survival rate which increased from just 4% in 1999 to more than double at 11% this year. PanCAN and its advocates have an ambitious goal of increasing the five-year survival rate to 20% by 2030.

In order to achieve this goal, this week advocates will ask members of Congress to support increases at both the NIH and NCI as well as the DOD’s dedicated Pancreatic Cancer Research Program, created in      2019 as a direct result of PanCAN’s advocacy efforts.

“For more than 20 years, PanCAN has been driving the national conversation about the urgent needs of the pancreatic cancer community and successfully advocating for increased federal research investment,” said Julie Fleshman, JD, MBA, president and CEO of PanCAN. “While PanCAN will continue to privately fund leading-edge research across the country, we urge Congress to prioritize this vital research since we cannot accelerate progress and improve patient outcomes without it.”

To kick off PanCAN Action Week, PanCAN is hosting Voices in Action, a virtual event where the pancreatic cancer community will have the opportunity to learn about the impact of their advocacy, hear inspiring stories and take actions to make Congress prioritize pancreatic cancer research funding. The special event will be hosted by PanCAN president and CEO, Julie Fleshman and include Congresswoman Anna Eshoo (D-CA), writer, director and PanCAN advocate Lisa Niemi Swayze, federally funded pancreatic cancer researcher Dr. Channing Der, and PanCAN advocate from New York, Casey Zmudzinski. The event will take place Monday, June 13 at 11 a.m. PT/2 p.m. ET and registration is free and open now.

To learn how to take action this week and accelerate progress, go to pancan.org/actionweek2022.