Pancreatic Cancer Action Network Rallies Survivors, Caregivers and Celebrities To Use Their Voice, Calling On Congress To Fund Research For World’s Toughest Cancer 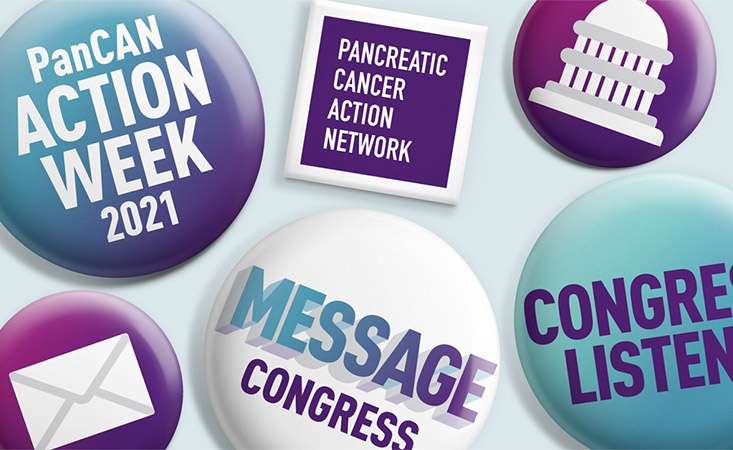 PanCAN Action Week kicked off Monday with the organization’s first-ever Voices in Action virtual evening event where participants heard the inspiring stories of PanCAN advocates honoring those they love and remembering those they have lost. The event was hosted by 17-year pancreatic cancer survivor Kitty Swink (“Star Trek”), her husband, Armin Shimerman (“Star Trek”) and Jonathan Frakes (“Star Trek”), who lost his brother to the disease. Appearances by other notable figures included “The Voice” semi-finalist Erin Willet, as well as two of PanCAN’s Congressional Champions for the cause, Senator Chris Coons (D-DE) and Representative David McKinley (R-WV). Nearly 2,000 participants tuned in from across the country to learn how to take action, marking the largest ever virtual gathering of pancreatic cancer advocates.

The remainder of the week was dedicated to advocates taking action by calling and messaging Congress to make their voices heard and urging them to increase the Department of Defense’s (DOD) dedicated pancreatic cancer research program from $15 million to $20 million. The DOD’s pancreatic cancer research program was created in 2019 as a direct result of PanCAN’s advocacy efforts. Additionally, advocates urged Congress to fund $46.11 billion for the National Institutes of Health and for $7.6 billion for National Cancer Institute.

PanCAN advocates from all 50 states contacted their members of Congress through nearly 8,000 calls and emails, as well as close to 300 virtual constituent meetings during PanCAN Action Week. Through their hundreds of hours of advocacy efforts this week, PanCAN’s message reached all 100 U.S. Senators and nearly two-thirds of the U.S. House of Representatives.

“We can all be advocates and play an important role in the mission to improve the lives of patients,” said Julie Fleshman, JD, MBA, president and CEO of PanCAN. “And I’m so proud of our PanCAN community for coming together this week and making their voices heard so we can continue to build momentum on Capitol Hill for these important research investments. One person can make a big difference —but together, we can do so much more.”

For more than 20 years, PanCAN has been at the forefront of propelling the national conversation about pancreatic cancer and advocating for federal research investment. These ongoing advocacy efforts led to the creation of a scientific framework for pancreatic cancer from the Recalcitrant Cancer Research Act and increased federal funding year over year.

As the third leading cause of cancer-related death in the United States and with a five-year survival rate of just 10%, pancreatic cancer demands urgent action to save lives. There is no early detection test for pancreatic cancer and few effective treatments are available, therefore research funding is crucial to solving this challenging disease. Currently, more than 80% of research funding for the disease comes from the federal government.