Pancreatic Cancer Advocates from All 50 States, Including 110 Survivors, Travel to Washington, D.C., to Advocate for Increased Federal Research Funding 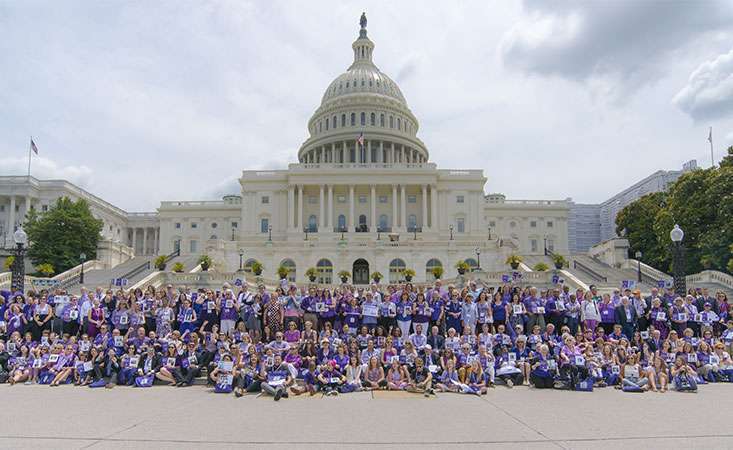 Washington, D.C., (June 25, 2019) -- With a five-year survival rate still at just 9 percent, the Pancreatic Cancer Action Network (PanCAN) mobilized more than 600 pancreatic cancer survivors, caregivers and advocates from across the country to urge their congressional representatives to fund more research into the world’s deadliest cancer. In addition to asking for their continued investment in the National Institutes of Health (NIH) at $41.6 billion for FY 2020, which includes $6.5 billion for the National Cancer Institute (NCI), they are urging Congress to create a dedicated pancreatic cancer research program within the Department of Defense’s (DoD) Congressionally Directed Medical Research Program (CDMRP).

The timing of the pancreatic cancer advocates’ mobilization was critical, as key decisions on federal funding for the new fiscal year budget will be made by Congress this month.

Pancreatic cancer is the world’s toughest cancer. It is the third leading cause of cancer-related death in the United States with an estimated 45,750 dying this year from the disease. While it has been included as part of a group of other cancers in the CDMRP’s Cancer Research Program since 2011, it has only received about 1 percent of the total CDMRP cancer investment.

“With extremely limited treatment options and no early detection method, additional funding and focused efforts are urgently needed to accelerate research into meaningful solutions for patients and their families,” said Julie Fleshman, JD, MBA, president and CEO of PanCAN. “A dedicated pancreatic cancer research program will create sustained funding and provide opportunity to more rapidly improve patient outcomes. Our grassroots advocates are extremely instrumental in helping us make this happen as quickly as possible.”

PanCAN is at the forefront of advocating for research and propelling the national conversation about pancreatic cancer. The organization was instrumental in the groundbreaking passage of the Recalcitrant Cancer Research Act (RCRA) in 2012, which enlisted countless volunteer advocates to send 76,000 emails, and make 14,000 phone calls and more than 1,300 visits to Congress in order to secure congressional support. RCRA and the increase in NCI funding for pancreatic cancer, among many other achievements, are due to the hard work of PanCAN advocates.

Steve Cook, a volunteer leader with PanCAN’s Huntsville, Ala., Affiliate, lost his wife to pancreatic cancer in 2018. At her request, he attended his first Advocacy Day last June, just two weeks after she passed away. He came back this year. For Cook, being around so many advocates and hearing their stories is very impactful. One story that stood out was that of  Sen. Chris Coons (D-Del.), who lost his father to the disease.

“Our political views are on different ends of the spectrum, but we share a common bond,” Cook said of Coons. “This disease isn’t a ‘red’ or ‘blue’ issue – it’s literally purple!”

“PanCAN will continue to privately fund leading-edge research across the country, but federal funding is especially critical now more than ever,” Fleshman said. “We commend Congress for continuing to prioritize this vital research because we cannot accelerate progress and improve patient outcomes without it.”