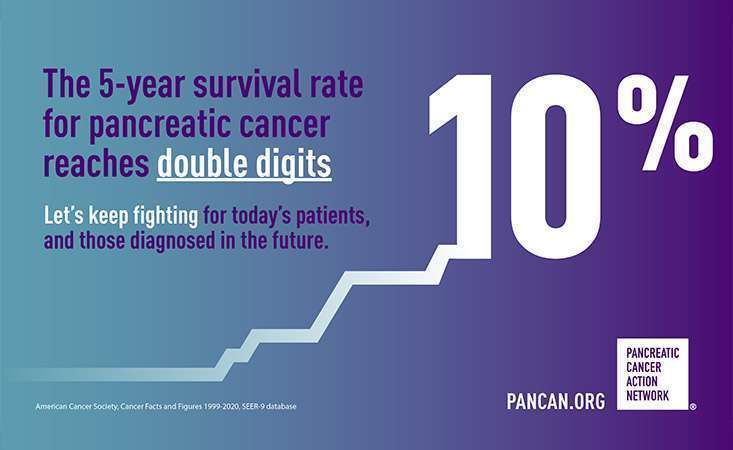 Annual Cancer Report Shows the Five-year Survival Rate for the World’s Deadliest Cancer Has Reached 10%, However More Americans Are Being Diagnosed Yearly

MANHATTAN BEACH, Calif. – (Jan. 8, 2020) – American Cancer Society’s (ACS) Cancer Facts & Figures report, released today, states that the five-year survival rate for pancreatic cancer has increased from 9 to 10%, according to the National Cancer Institute’s (NCI) Surveillance, Epidemiology and End Results (SEER)-9 database. Thanks to a growing field of researchers, more treatment options, increased federal funding and grassroots advocacy efforts across the country, this is the first time ever this figure has reached double digits for pancreatic cancer, a major milestone for the disease.

Since its founding in 1999, the Pancreatic Cancer Action Network (PanCAN) has taken a comprehensive approach to attack the world’s toughest cancer on all fronts – including research, clinical initiatives, patient services and advocacy – in order to improve patient outcomes and increase overall survival.

“We are so grateful to the entire community of pancreatic cancer researchers, healthcare professionals, volunteers and advocates who have worked together alongside PanCAN to accelerate progress, but our fight is not over,” said Julie Fleshman, JD, MBA, PanCAN’s president and CEO.

“While we are thrilled to see the five-year survival rate reach double digits, 10% is still the lowest survival rate of all major cancers, which is unacceptable. This underscores the continued urgency for funding, research and awareness to move the needle even further.”

To support all pancreatic cancer patients and accelerate progress, PanCAN provides world-class patient resources including a Clinical Trial Finder offering access to the most up-to-date and comprehensive pancreatic cancer clinical trial database in the United States; listings of pancreatic cancer specialists; as well as the Patient Registry, a global database of patient information to help advance research and improve patient care.

Another key example is PanCAN’s Know Your Tumor® precision medicine service, launched in 2014 to determine whether patients’ tumor biology and genetics can impact their treatment decisions and outcomes. Today, thousands of patients have received personalized reports through Know Your Tumor, and approximately one in four of them include “actionable” findings – results that can influence that patient’s treatment options.

In addition, since 2003, PanCAN has awarded 173 grants to 170 scientists at 64 institutions, with a cumulative research investment projected to more than $104 million.