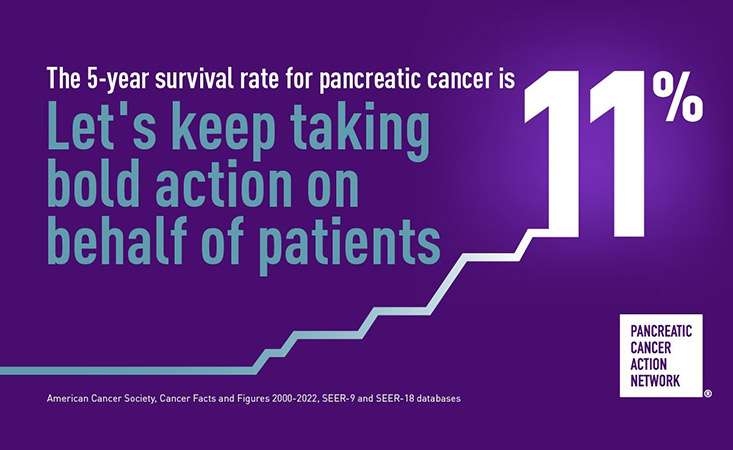 While this increase of five percentage points over the last decade signifies important progress, the Facts & Figures report also reveals an estimated 62,210 Americans will be diagnosed with pancreatic cancer in 2022, which is an increase of nearly 3% from last year. According to the report, while pancreatic cancer is currently the 10th most commonly diagnosed cancer in the U.S., it remains the third-leading cause of cancer-related deaths. Approximately 49,830 Americans are expected to die from the disease this year.

Since its founding in 1999, the Pancreatic Cancer Action Network (PanCAN) has taken a comprehensive approach to attack the world’s toughest cancer on all fronts – including research, clinical initiatives, patient services and grassroots advocacy – in order to improve patient outcomes and increase overall survival.

“We are thrilled to see forward momentum for the five-year survival rate. Even a single percentage point represents hundreds of pancreatic cancer patients who will have more time with their loved ones, but we can’t stop there,” said Julie Fleshman, JD, MBA, PanCAN’s president and CEO. “11% is still the lowest survival rate of all major cancers, so there’s still an urgent need to increase funding, research and awareness as we work to further improve patient outcomes.”

Historically, the survival rate for pancreatic cancer has been low because, with no early detection method and often only vague symptoms, it is typically diagnosed too late once the disease has already spread. At this point, surgery is no longer a possibility and there are currently limited chemotherapy treatment options, underscoring the urgent need for an early detection method for pancreatic cancer as well as new and better treatment options for patients.

Looking toward the future, PanCAN has set an ambitious goal to see the five-year survival rate increase to 20% by 2030.

“While this goal is a stretch, it’s certainly not out of the realm of possibility,” said Lynn Matrisian, PhD, MBA, PanCAN’s chief science officer. “There are two main ways we improve survival. One is early detection. We catch the cancer earlier, giving people more chance for surgery, more chances to treat it with chemotherapeutic agents. The other way we improve survival is by making chemotherapy and other treatments better.”

Since 2003, PanCAN has invested more than $149 million in research, with an additional $28 million anticipated this fiscal year. This includes 218 grants for scientists across the country as well as large-scale research initiatives such as PanCAN’s Precision PromiseSM Clinical Trial, which seeks to accelerate the approval of new treatment options for pancreatic cancer patients and PanCAN’s Early Detection Initiative, which hopes to develop a strategy to diagnose pancreatic cancer early when surgery is still possible, leading to better patient outcomes.

To support all pancreatic cancer patients and accelerate progress, PanCAN provides free, personalized patient support through its Patient Services program, including a Clinical Trial Finder offering access to the most up-to-date and comprehensive pancreatic cancer clinical trial database in the United States.