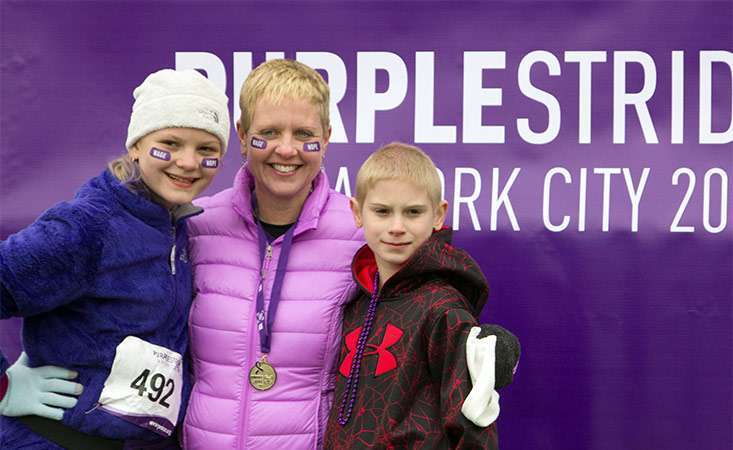 Pancreatic cancer is the nation’s deadliest major cancer, with a five-year survival of just 9 percent. As the go-to organization supporting pancreatic cancer patient services and research, the Pancreatic Cancer Action Network (PanCAN) has an urgent mission to improve outcomes for patients battling the disease today and to double pancreatic cancer survival by 2020.

PurpleStride is a national movement that is transforming the face of pancreatic cancer. Each year, more than 80,000 people in cities across the U.S. participate in PurpleStride 5K walk/run events to raise funds for the organization’s key initiatives, including Precision Promise, Know Your TumorSM and the Patient Registry. PurpleStride has raised more than $76 million since 2008.

Lin Sun, spokesperson for the New York City PanCAN Affiliate, knows first-hand how important these resources are for families who have been touched by this disease.

“I found the Pancreatic Cancer Action Network online after my mother was diagnosed with the disease, and it turned out be more helpful and meaningful than I ever could have imagined,” Sun said. “I was able to connect with a PanCAN Patient Services Case Manager who provided a wealth of knowledge on clinical trials, survivor contacts and physician information. Through this, my family found a renowned pancreatic cancer oncologist and my mother received top-notch care for 8 months until her passing in February of 2014.”

To register, donate or learn more about PurpleStride New York City, please visit www.purplestride.org/newyork. For more on PurpleStride and the Pancreatic Cancer Action Network, watch the PurpleStride PSA and the organization’s PSA.