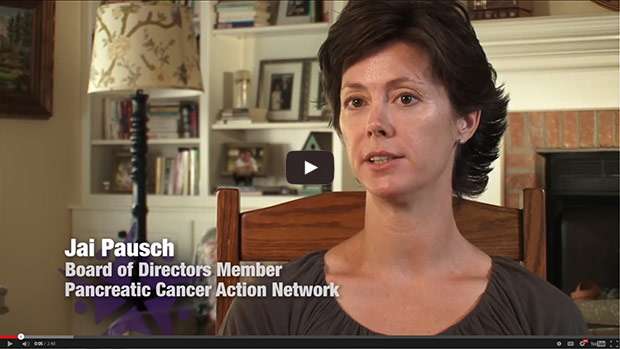 Since joining the board of directors of the Pancreatic Cancer Action Network in 2009, I have become more committed than ever to fighting this devastating disease, which is the most aggressive and lethal form of cancer. I am honored to support an organization and a cause that was so important to my late husband, Dr. Randy Pausch, who passed away from pancreatic cancer in July of 2008.

Randy was a wonderful husband and a devoted father who always strived to live his life to the fullest and worked hard to support causes that were important to him. Even though he was fighting a losing battle and enduring great pain during the last few months of his life, on March 13, 2008, he movingly testified before Congress to advocate for greater federal funding for pancreatic cancer. His effort became the catalyst for the introduction of the first-ever substantive legislation to fund pancreatic cancer research at the federal level: the Pancreatic Cancer Research & Education Act.

I know that more research into the origins of the disease is the key to finding a cure, and the way to make this happen is through ongoing advocacy efforts. One of the most meaningful ways we can honor Randy’s memory is to make sure the funding is there to support scientists studying pancreatic cancer. The Pancreatic Cancer Action Network’s annual Pancreatic Cancer Advocacy Day is an empowering way to further this goal. Each year, hundreds of the organization’s supporters gather in Washington, D.C. to meet with their elected officials and encourage them to support legislation to fight the disease. I encourage everyone to join this incredible effort – every voice really does count.