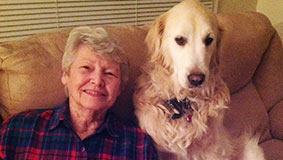 We were shocked; she thought she had a hiatal hernia like her mother had.  When you hear the words “pancreatic cancer,” you immediately think the worst.

We went, together with my dad, to a surgical oncologist.  After more tests, it was determined that she was a good candidate for surgery.  She had chemotherapy and radiation before her surgery.  Her surgery was scheduled for 11-11-11 which we considered good luck.  She had the Whipple procedure and was in surgery for nine hours.  She had 80% of her pancreas removed, her spleen, her gallbladder and 20% of her stomach.  She was in the hospital for two weeks and in rehabilitation for another two weeks.  She also had chemotherapy after surgery, during which she had to have several blood transfusions.  It was a long recovery, but they got all the cancer and she is doing great.

Connect with other caregivers for information, support and inspiration through the Pancreatic Cancer Action Network’s Survivor & Caregiver Network.

A year later we celebrated her 80th birthday with a huge party.  Everyone wore purple and family and friends wore stickers that read, “I wear purple for my mom (or friend, or grandma) who is a pancreatic cancer survivor.”  This November she will be cancer free for two years.  My family feels so blessed!