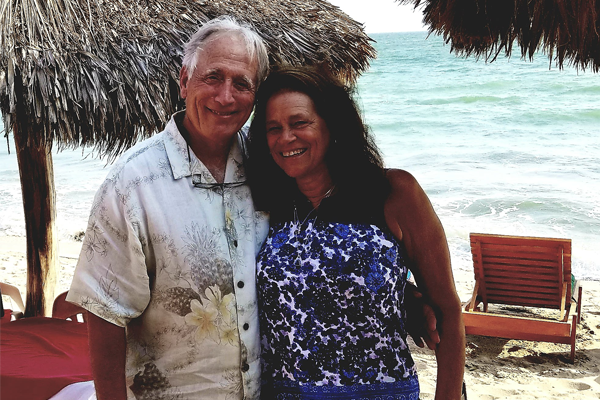 My husband Rich had been complaining for a few months about pain in his back. In addition, he was having issues with his stomach (bloating, indigestion, etc.). He had suffered from digestive issues 15 years earlier. At the time, he saw a naturopath doctor. The naturopath made recommendations regarding enzymes and other supplements. He followed the instructions of the naturopath; his overall heath improved, and life went on.

When Rich started complaining of stomach issues again, I thought that perhaps he needed to go back on the regimen he was on a few years earlier. The issues persisted and seemed to be getting worse. The pain in his back kept him awake at night, and he lost his appetite. He made an appointment with his primary care physician. Now, we come to the part of his story that is all too familiar to many pancreatic cancer patients. When he finally went to the doctor, he was told that it was gastroesophageal reflux disease (GERD). He was given a prescription for GERD and told to return in two weeks. Two weeks came and went and nothing changed. Things later got worse. It was Memorial Day weekend 2014, and he was listless. He hadn’t been himself for days. I looked at him that Monday morning and said, “You look horrible.” I had a doctor’s appointment the following day and checked to see if he could get an emergency appointment. He got an appointment with a general practitioner that saved his life. She immediately ordered the tests that led to his diagnosis of pancreatic cancer. Thursday of that week, I received a call from Rich and our world changed. He just heard from the doctor and there was a mass on his pancreas. June 6, 2014, was the endoscopy that confirmed the diagnosis of stage IV inoperable pancreatic cancer. Rich was still in a twilight sleep when he was told, “If you don’t do anything you have six months to live, and with treatment, maybe 12 months.” I was handed one brochure on clinical trials, and the doctor was gone. It was Friday afternoon – he was the last patient in the facility; we were alone and horrified. Of course, we had no idea what this journey meant. I spent the weekend on the internet, inconsolable. Thus began the cycle of CT scans, blood work, meetings with the oncologists and agonizing decisions.

I went into warrior mode when he told me he needed an endoscopy. On June 5, I called to make an appointment, and the first available was July 15. I called a manager at our health insurance (one of the largest providers in the state of California) and told her I would drive anywhere to get this test, but we needed one yesterday. That is how June 6, 2014, defined the time “BPC” (Before Pancreatic Cancer) and “APC” (After Pancreatic Cancer). Our lives were forever changed.

The battle continued regarding CT scans and second opinions. After the CT scan results, we were told that his tumor was inoperable. We wanted a second opinion.  We were told that our insurance does not pay for second opinions outside of network, and that a second opinion was unnecessary. We were fortunate that Rich knew someone who knew a surgeon at a high-volume cancer center in Southern California. He confirmed the initial diagnosis and the fact that it had occluded the hepatic artery. At the time of diagnosis, surgery was not an option, unless the tumor shrunk from chemotherapy. The tumor was in the middle of his pancreas and measured 5 centimeters.

From the date of diagnosis to his first treatment was two agonizing weeks. He was given several different chemotherapy options, or no treatment at all. He opted for one of the chemotherapy regimens. He decided that if he had one shot at this disease, he would hit it with the hardest regimen. He was told that this treatment option was very difficult, but it offered the best odds, as slight as they were. The oncologist, although nice, was not hopeful at all. She was very matter of fact, and clearly not invested in the treatment decision we chose. We never met her before that appointment, so there was no investment on our end, either. Through our insurance plan, our oncologist options were limited, and we were not able to see an oncologist who specialized in pancreatic cancer. We researched the treatment protocols and knew we were offered the standard of care for pancreatic cancer at the time.

Rich also agreed to see a holistic gastroenterologist. She ran some massive blood tests and determined the tumor was not active at the time. Based on her analysis of his blood, she prescribed various integrative therapies, one of which was designed to support his liver, since the liver and kidneys are hit very hard during chemotherapy. He also made a major lifestyle change regarding his diet. No red meat, no sugar, no preservatives, no dairy, no wheat. He also had 16 ounces of freshly made green juice every day. Since I do most of the cooking in our house, I decided I was going to feed him to health. I was not worried about calories as much as I was worried about nourishment. He also had a medication to help stimulate his appetite. Toward the end of his chemotherapy treatment, Rich began to gain weight. When he was first having problems, he weighed 210 pounds. At his lowest point, he weighed 170 pounds. He did not look very good 40 pounds lighter.

By the middle of his treatment, his CA 19.9 levels were within the normal range. He slowly started to gain weight. He tolerated the chemotherapy for 12 rounds. For the last three rounds, one of the chemotherapy drugs was removed, as it can cause severe neuropathy. He participated in a targeted radiation clinical trial in February 2015. Tumor markers were inserted around his tumor to ensure the radiation could directly hit the tumor. The protocol included five days of radiation. He did not complain of any side effects. He was already fairly fatigued from the nine months of chemotherapy, so it was difficult to tell if he was more tired because of the radiation.

He has not had any treatment since February 2015. The holistic doctor gave another integrative therapy to combat his serious neuropathy. His feet are extremely tender; however, he is not in chronic pain. It has taken about two years from his last treatment for his memory to return to pre-pancreatic cancer levels from chemo brain. He might have some memory lapses, but they are the result of age more than treatment.

His last scan in September did not show any evidence of disease. His tumor is still inoperable, and another biopsy is too risky because the biopsy needle could penetrate the artery. They discovered blood clots in his lungs about six months ago, which is not an unusual side effect from chemotherapy. He completed his last round of blood clot treatment at the end of March. On June 6, 2017, we celebrated three years since his diagnosis. He still maintains a clean and healthy diet; however, he does indulge in a biscuit or a piece of bread from time to time. He follows the healthy diet religiously and continues to see his holistic doctor on a weekly basis. As of today, he is healthier than I am.