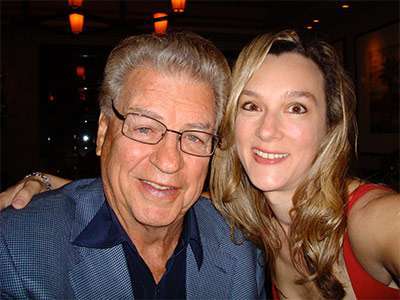 Cydney Daly with her hero and inspiration -- her dad, Chuck Daly.

Chuck Daly was an accomplished basketball coach, mentor and an inspiration in the professional sports arena. But to his daughter, Cydney, he was more than that.

“My dad was my rock,” Cydney said. “He was the person that I would turn to in times of joy and sorrow. He was my voice of reason. In my eyes, he was magical and he could do anything.”

Her dad coached at the high school and college level, but he was best known for his NBA coaching, where he won back to back titles with the Detroit Pistons. He also brought home a gold medal as the head coach of the original Olympic “Dream Team” in 1992, coaching legends like Michael Jordan, Magic Johnson and Larry Bird.

“Chuck Daly was a great friend and mentor to me and countless others. There could not have been a better competitor, teacher and ambassador for NBA basketball than Chuck. His integrity, heart and love for the game will live on in perpetuity and always be a great example for us all,” said Rick Carlisle, fellow NBA coach and friend of Chuck Daly.

He was inducted into the Naismith Basketball Hall of Fame twice, and the NBA developed the Chuck Daly Lifetime Achievement Award in his honor.

“My dad has always been my hero because he lived his life with integrity, strong character and a lively personality,” Cydney said. “I admired those qualities and have always strived to emulate him.”

When Chuck passed away in May 2009 after a three-month battle with pancreatic cancer, Cydney said she felt lost. 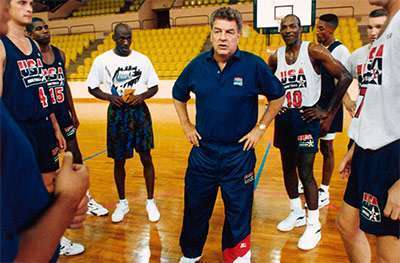 Chuck Daly in a huddle during practice with the 1992 Olympic “Dream Team.” (Photo courtesy of si.com)

“There isn’t a minute that goes by that I don’t miss him, still,” she said. “The pain from losing him is unbearable.”

She started researching the disease after his death and came across the Pancreatic Cancer Action Network and knew she had to get involved.

“I was fortunate to meet and befriend Pamela Acosta Marquardt, the Pancreatic Cancer Action Network’s founder. I was completely drawn in by her dynamic drive to fight this horrific disease.”

Cydney attended PurpleStride Central Florida in 2010 and volunteered her time by speaking at the event and donating funds to the cause. Since then, she has continued to volunteer and is determined to be a hero not only for those currently fighting the disease, but to honor her dad, who was a hero for many.

“There have been too many people who have lost loved ones to this disease. Too many families have been torn apart and too many tears have been shed,” Cydney said.

“I’m proud to volunteer because the Pancreatic Cancer Action Network is dedicated to advocacy and getting legislation passed for research funding, developing clinical trials, offering resources and services to patients and bringing together a community of people who are dedicated to winning this fight.”

This year, Cydney has developed a challenge called the Daly Family Challenge that will benefit PurpleStride Central Florida. 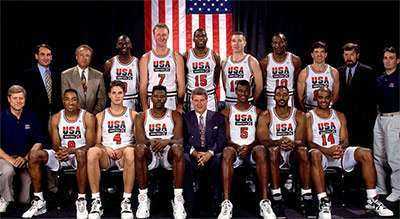 For two weeks in October, Cydney will match every donation, dollar for dollar, up to $10,000, to raise funds in the fight against the disease. The challenge is set to begin on Oct. 1 and will run through Oct. 15. (You can participate in the challenge by visiting purplestride.org/centralflorida and making a donation during those two weeks. Every dollar counts!)

Cydney said she is committed to being a champion for the cause.

“To be called a ‘Champion of Progress’ is an honor that I take very seriously. No one should have to feel the pain that comes with the loss of a loved one from pancreatic cancer. No one should suffer like my dad did from this horrible disease. Getting involved is the best way to bring hope to those diagnosed with pancreatic cancer and their loved ones.

“Wage Hope. This is a fight that we can win together!”

Be a hero to others in your community by participating in your local PurpleStride.