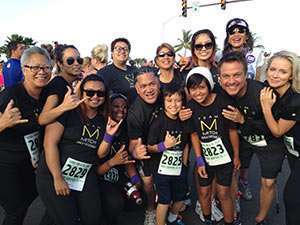 Members of Team Mitch gather in Kona, Hawaii, to support Angus Mitchell, second from right. Mitchell was there to pay tribute to his father, the late Paul Mitchell. Angus Mitchell’s mother, Jolina Mitchell (back row, far right), avidly supports the cause, too.

On Sunday, June 22, some 11 members of Team Mitch gathered at the Kona Marathon and Half Marathon start line. Months of hard work had led the team to that day. They were energetic, enthusiastic and proud.

Leading the team was Angus Mitchell, the son of Paul Mitchell – the legendary hair industry expert who passed away of pancreatic cancer 25 years earlier. Mitchell, a longtime supporter of the Pancreatic Cancer Action Network (he was 18 when his father passed away in 1989 at only 53 years old), was smiling ear to ear.

That’s because Team Mitch had excelled in raising funds and awareness for the disease – the team had raised more than $38,000 for the Pancreatic Cancer Action Network, far surpassing the original $5,000 goal.

They did it by asking their own network of friends, family and colleagues for personal donations and by holding special fundraising events prior to the half marathon. Paul Mitchell the School in Honolulu hosted a local fundraiser to raise money for the team, and the Paul Mitchell Schools as a whole banded together to donate $25,000. One-of-a-kind vintage Paul Mitchell T-shirts were also designed and sold to support the team’s efforts.

Mitchell spent months training for the half marathon, a 13.1-mile-long race, through the Pancreatic Cancer Action Network’s TeamHope® endurance program – which offers the opportunity to raise awareness and funds for the disease while training for and running in a marathon, half marathon, 10K or other race. But a last-minute pre-race injury sidelined him on race day, and he instead participated with his teammates on a shorter route. A close friend ran the full marathon in honor of Mitchell’s efforts. 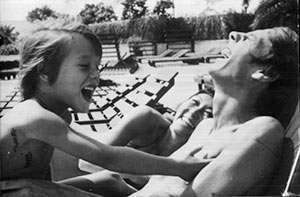 Angus Mitchell with his father, Paul Mitchell, who died of pancreatic cancer in 1989.

Mitchell said he chose Kona as a race location because Hawaii has significant meaning for him. He lived there with his father for several years beginning when he was 11 years old.

“That was a wonderful time in my life,” he said. “I always enjoyed being with my dad. I felt very comfortable and safe in his presence. Although he was busy at that time managing a growing business, he gave 100 percent of his attention to me when we were together.”

During the months of training prior to race day, Mitchell remembers feeling outside his comfort zone at times.

“Leading up to the race, I kept thinking, ‘What am I doing? I’m not a runner!’ But then I’d remember my dad, and how hard he fought, and I’d remember all those who are still fighting. That motivated me like nothing else.”

Mitchell, a co-owner of John Paul Mitchell Systems, has followed in his dad’s footsteps professionally. He is a hairdresser and art director in the organization. He said he felt honored that he could remember his dad while supporting others affected by the disease.

“When you go through loss, you realize how precious time is,” Mitchell said. “I’ve made it a goal to make sure that others have the opportunity to live their lives and extend their fighting chance against pancreatic cancer by supporting the Pancreatic Cancer Action Network in any way I can.

“I know my dad would be so proud to see how we’ve continued his legacy, and how we help others while we’re at it,” he said.