If It Weren’t For PanCAN Patient Services, the Puzzle Pieces Just Wouldn’t Fit 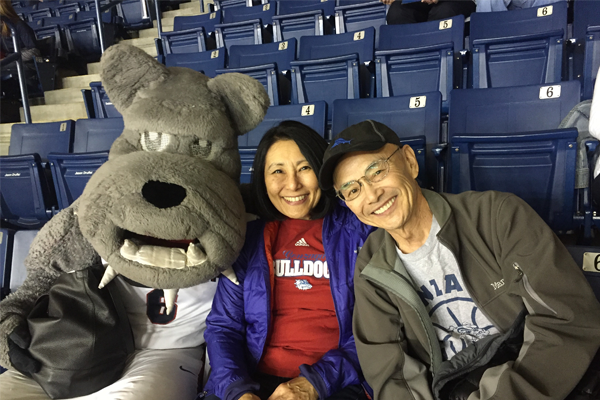 Dorothy and Joe Yamamoto pull for the home team at a Gonzaga ballgame alongside Spike the bulldog.

Dorothy and Joe Yamamoto pull for the home team at a Gonzaga ballgame alongside Spike the bulldog.

Joe Yamamoto was in serious, excruciating pain. At first it was thought to be diverticulitis, but when the doctor ordered a CT scan, he found stage IV pancreatic cancer. That was in September 2015.

Today, doctors can find no evidence of disease.

“I was told twice by doctors to get my affairs settled because I only had three to six months to live,” Yamamoto said.

The diagnosis hadn’t surprised him.

“My family is littered with pancreatic cancer. Both my parents passed away from it, and cousins and other relatives have had it. We all carry the BRCA2 genetic mutation.”

“That packet was the most wonderful thing,” she said, “because you get scared to death online. You don’t learn anything else besides the terrible survival rate.”

Dorothy Yamamoto was directed to pancreatic cancer specialists in Arizona, where the couple’s daughter owned a home. She attended a PanCAN educational event there to gain more knowledge, and she has also connected with fellow caregivers as well as survivors through our Survivor and Caregiver Network. PanCAN Patient Services also gave her information about clinical trials available for BRCA2 patients.

“The survivors and caregivers I’ve spoken with were so wonderful to tell us about their journey,” she said. “They gave us hope. They urged us to get a second opinion and to be our own advocate – to keep knocking on doors.

“And we have. It can take a village, and help comes in many forms on the cancer journey – perhaps it’s a dietitian, an oncology massage therapist, integrative oncologists.”

The Yamamotos moved from their home in Washington to the Phoenix area so Joe could be treated by pancreatic cancer specialists. Although the couple feels extremely grateful for his good health today, Dorothy said she will seek a second opinion regarding the next steps in her husband’s care. She credits PanCAN Patient Services with empowering her in this way.

“We are so appreciative of PanCAN,” she said. “If it weren’t for PanCAN Patient Services, the puzzle pieces just wouldn’t fit. We would have been treading water and we wouldn’t have known about all of our options.”

You are your own best advocate. The Pancreatic Cancer Action Network strongly recommends that you discuss your treatment goals with your healthcare team and know all of your options at every stage of your disease.