“A Month of David” Honors Her Husband’s Memory 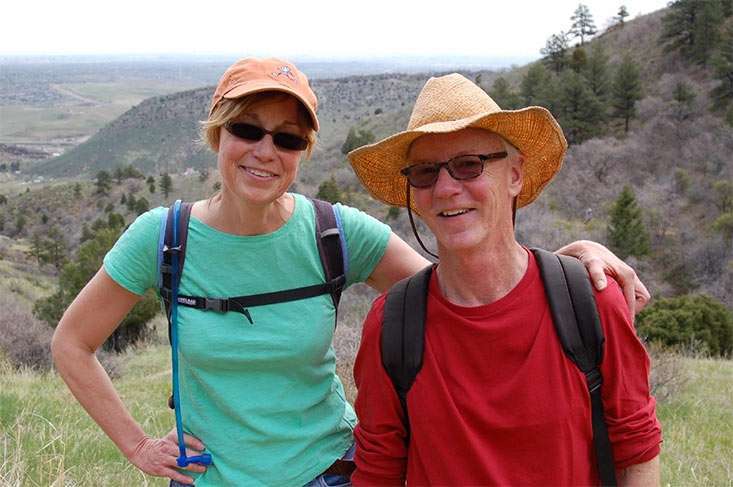 Kim Hagar and husband David had just purchased a camper and were making plans to retire.

A pancreatic cancer diagnosis wasn’t part of the plan.

It all started the morning after Kim’s retirement party. David woke up with terrible stomach pain – he thought he’d eaten something bad. But the pain didn’t go away. Something was terribly wrong. But nothing out of the ordinary showed up in multiple tests or on a CT scan.

Five agonizing months of tests and more pain went by with no answers.

Kim wondered how her husband could possibly have pancreatic cancer. He was athletic, strong and healthy.

Kim had been planning a celebration of his life when the coronavirus pandemic hit. All of PanCAN’s PurpleStride events went virtual so she couldn’t run in PurpleStride Denver as planned. But she knew she had to do something and she simply couldn’t wait for “a better time.”

That’s when the idea came to her.

A Month of David. Kim would spend as many minutes as she could during the month of June, when she would have otherwise been part of PurpleStride Denver in-person, doing things that reminded her of David and then donating $1 to PanCAN for every minute spent. She’d ask friends and family to participate, too, and then match their donations with her own.

Kim thought it sounded crazy – would anyone even participate, particularly in the midst of a pandemic? 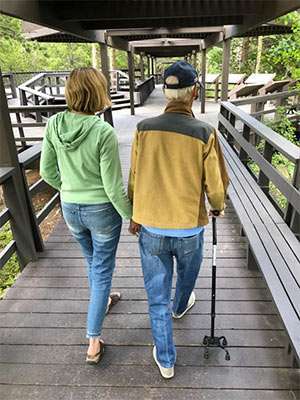 Spending some last, sweet moments together.

Nonetheless, in June, she started tracking all her activities: Eating David’s favorite foods; having socially distanced glasses of wine on the porch with friends; taking beautiful drives through the mountains on David’s favorite routes; hosting a series of five Zoom calls for people who knew him.

The Zoom calls consisted of his family, colleagues, and childhood and newer friends, most of whom had never met. Everyone told stories that the others hadn’t heard about David.

Kim said, “At most celebration of life gatherings, people gravitate toward those they know. The Zoom calls gave people a chance to get to know one another and to learn something new about David. He had quite an impact on people, and he really didn’t realize it.”

David would talk to anyone. He listened. He truly cared. He befriended people experiencing homelessness and fed them. When David was listening to you, you felt like the only person in the room.

Apart from the couple’s fulfilling careers (she as a psychotherapist and he as a data analyst with degrees in math, computer science, biology and a master’s in telecommunications), Kim and David spent the past 33 years enjoying nearly every outdoor activity together: Downhill and cross-country skiing, canoeing, biking, backpacking, camping, hiking and running.

David was always curious, taking photos and reading about many subjects, particularly history. After he retired, he would become a birder, he said.

“A Month of David” benefited Kim in that it allowed her to work through the painful memories of David’s last months.

“Hearing other people’s stories and sharing my own helped distance me from that terrible time. I replaced some of it with favorite memories and stories I might never have heard before.”

She hopes “A Month of David” will inspire others who want to pay tribute to a loved one and fundraise for the pancreatic cancer cause, too.

“There IS something you can do. I was never a big fundraiser; I learned you just have to ask. People are glad to support you if you have a good cause and it’s personal. You will be surprised.”

Both David’s mom and maternal grandfather died from pancreatic cancer and his two sisters are being monitored for the disease.

Kim said, “I believe in PanCAN’s mission and I’m glad to support it. It’s now my new mission. The amazing support you provide, information about clinical trials. I feel so good giving to PanCAN.

“If my fundraising helps one person it’s worth it.”

You can honor a loved one’s memory like Kim did. Sign up for a PurpleStride near you and start fundraising now. We are grateful for everything you do to support pancreatic cancer patients.
Share  Tweet
More on:
You may also be interested in...