On January 22, 1997, my husband, Randy Stein, was diagnosed with stage-four, inoperable pancreatic cancer, with metastases to the spleen and kidneys. At that time, the doctors told us he had three months to live.

Healthcare professionals, friends and family tried to help, but they really didn’t have any experience in dealing with the disease. The Internet only provided dire statistics and we did not know of any survivors. 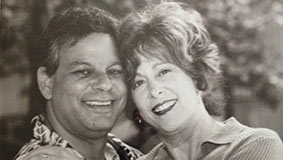 Ultimately, we found great medical care, and we dealt with each challenge as it presented itself.

In spite of that frightening news and the lack of information available back then, Randy lived for more than eight years following his diagnosis.

Those years were filled with travel and celebrations, and we appreciated each day because we gained new insight into the importance of living. During our journey, we met a woman named Pamela Acosta Marquardt, who had just founded the Pancreatic Cancer Action Network, and she asked us to get involved. This opportunity enabled us to help create a sorely needed resource for information on the disease and to help support awareness for a cancer that had previously been ignored.

We joined other patients, caregivers and activists in this effort and found great satisfaction in giving back. We raised money through the organization’s annual An Evening with the Stars gala and traveled to Washington, D.C., to advocate for more federal funding for research. Randy sat on the board of directors as the organization’s first treasurer. After his death, I became a board member to continue to provide hope and direction to others.

During the most trying time of our life together, the Pancreatic Cancer Action Network offered us a lifeline for support, and we were able to connect with hundreds of others who were in our same situation. Over the years, the organization grew and became a national leader in the fight against the disease.

After Randy’s death, I wanted to do something meaningful to keep his memory alive. I really wanted to make a large donation to the Pancreatic Cancer Action Network because it had been such a large part of our lives, but I knew Randy would want me to take care of myself first financially. After careful consideration, I came up with a plan to meet both of these goals.

I began donating money to the Pancreatic Cancer Action Network as my finances allowed and volunteering whenever I could. Eventually, I decided to donate part of my estate to the organization. When I was making these preparations, I found there were many types of other planned giving vehicles, too.

Having the Pancreatic Cancer Action Network in my will enables me to always feel connected to the cause while still being able to go on with my life like Randy would have wanted.

I know that this organization will always be a part of my life, so I am glad to support it in any way I can. Hopefully, my contributions will help the Pancreatic Cancer Action Network to continue fulfilling its mission until a cure is found.