Donors  Pancreatic Cancer News  Stories of Hope  It Starts with Someone: Greg Baiocchi

It Starts with Someone: Greg Baiocchi 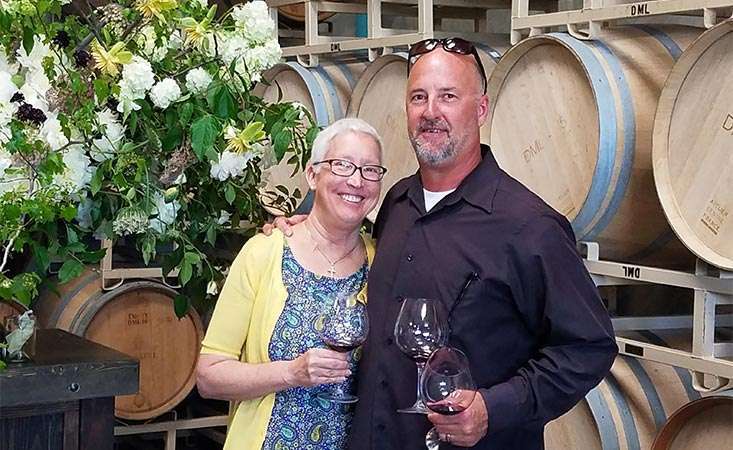 Greg and Sharon Baiocchi opened their vineyard and winery in 2005, bottled their first wine in 2009 and opened their tasting room in 2013.

The love Greg and Sharon Baiocchi shared was akin to the fine wines they bottled and sold – it just kept getting better over time.

“We did everything from ground to glass,” Greg said of their wine operation based in the Sierra Foothills of California’s wine region. “And we made a great team. I would have what-iffed myself out of the opportunity, but Sharon had the wherewithal and strength to start Baiocchi Wines. I always like to say that she was the brains and I was the mule.” 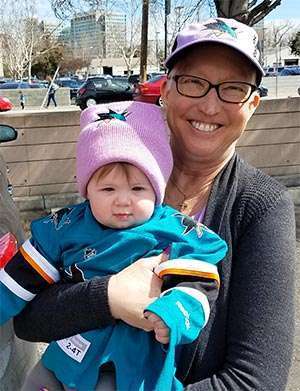 Before Sharon’s passing, she was able to spend time with her grandchildren, whom she adored.

Their grapevines and business blossomed from 2005, when they started the company, to 2009, when they began selling bottles, to 2013, when they opened their tasting room. They felt like one of those unstoppable power couples, until one day, time did stop, or at least it felt like it did.

In the spring of 2015, doctors found a tumor on Sharon’s pancreas and a lesion on her liver. Further testing determined the diagnosis – stage IV pancreatic cancer.

“She faced pancreatic cancer the way she faced everything – by giving it her all,” Greg explained. “She did a variety of therapies, including standard treatments and clinical trials, between the spring of 2015 and the spring of 2017.

“But by April 2017, Sharon stopped responding to treatment, so she decided we would live life as much as we could. We did everything we could to enjoy every minute of every day.”

Throughout the spring and summer, they traveled to Hawaii and Yosemite and drove along California’s coast. Sharon watched two of her young grandbabies grow and learn. 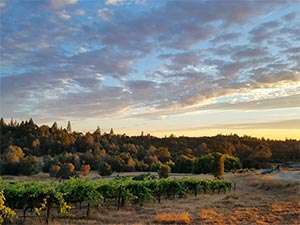 “We did everything from ground to glass,” Greg said of his wine operation with late wife Sharon.

In early autumn, they harvested their grapes and held their annual fall release party. Sharon was happy and mostly healthy enough to enjoy all those magical moments.

Greg said those memories often make him smile, which makes him eternally grateful. Sharon, who was just 57 at the time, passed away from pancreatic cancer in October 2017, just a few weeks after she got to see one last successful fall harvest.

“We all know life is short, but when you are given a perspective that there is an amount of time that you are healthy – you should try to enjoy every moment doing what you love to do. That’s what those five months were all about,” Greg recalled.

At nearly 12 months since her passing, this is the first year Greg tended to the crops, harvested the grapes and bottled wine without Sharon. In honor of her, he decided that while Sharon couldn’t be physically present for the 2018 fall release party, she would be there in spirit. 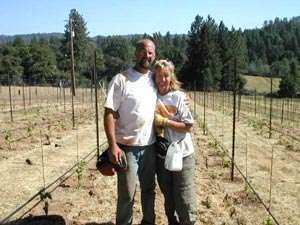 Greg and Sharon pose in front of the once-bare Baiocchi Wine grounds.

Greg will donate 10 percent of all proceeds from Sharon’s signature wine – the Baiocchi 2015 Grenache Sharon’s Vineyard – to the Pancreatic Cancer Action Network (PanCAN).

“From Sharon’s diagnosis to searching for clinical trials, it was all so daunting,” Greg explained. “PanCAN helped us weed through it tremendously. It only made sense to come full circle on the anniversary of Sharon’s passing.”

In addition to helping PanCAN improve patient outcomes and double survival, buyers of the Baiocchi Grenache also get a little message from Sharon.

On the back of each bottle is a quote Sharon loved and lived – “Face your fears and live your dreams.” Something Sharon did in life, and something Greg hopes others will do in her memory.

Are you inspired by the story of Greg and Sharon Baiocchi? You can make a difference, too. Get involved today!
Share  Tweet
More on:
You may also be interested in...