Life After Loss  Stories of Hope  Why I Wage Hope: A Son’s Story

Why I Wage Hope: A Son’s Story 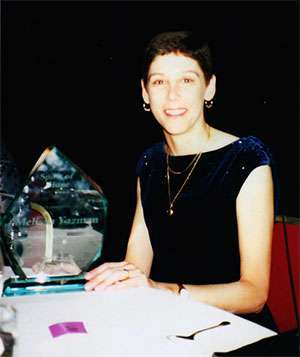 At the age of nine, everybody thinks their parents are invincible. I was no different. That’s why on a routine trip to the hospital with my mom in 2001 – a trip that would prove to be her last – I spent the better part of an evening pacing around her room and explaining that “of course she would see her 9-year-old son turn 109.”

Believe me, I had it all figured out.

My mother knew better, and she told me so. But after watching her beat death four years earlier, when she received a three-month prognosis, I knew that she was going to be fine. She just needed someone to remind her to hope the way she had reminded all of us to hope for all those years.

In what seemed like a moment, she saw her promising careers in law, motherhood and T-ball coaching shift to a bitter fight with a deadly disease.

But instead of focusing on her own grim fate, she found strength by advocating for everyone else like her. Arguments in law school became health policy debates on CNN. Dinners with friends became lunches with senators. And for me, adventure time with my mom became a march for the cure.

She was my superwoman, and she could have been silenced with a few words from a doctor. Instead, she found her voice, just as all of us who have been touched by this devastating disease can choose to do. 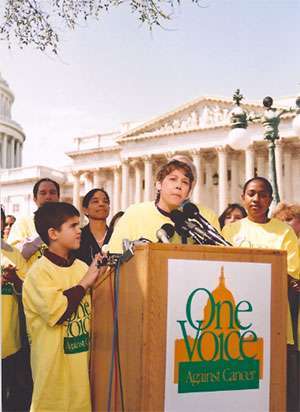 Melissa Yazman speaking at the One Voice Against Cancer Lobby Day on Capitol Hill in 2001, with Josh by her side

Our paths are all unique, but we are united in a common understanding that my mother professed throughout her battle: As long as you are alive, there is hope.

However convinced I was of my mother’s inspiring declaration at the age of nine, it was hard not to feel like hope left this earth with her for years after her passing. Hearing stories about Mom from everyone but her constantly reminded me of how much I missed her voice.

So for many years I stayed away from this community, this movement, to avoid further pain from a still-fresh wound.

But then, last spring, I watched a friend whose dad had been diagnosed with pancreatic cancer organize what turned out to be the strongest team at this year’s PurpleStride® event in Washington, D.C. That friend, Susanna Berger, Captain of Team Berger, inspired those in her life to raise over $68,000 for the fight against pancreatic cancer, far surpassing any other team at the event.

After I walked with Team Berger, I looked for someone I thought might be at the event, someone I had met years before as a child hanging on to my mother as she began her advocacy work for the pancreatic cancer community. And I found her. “Josh???” I heard, as I approached her – and there stood Julie Fleshman, President and CEO of the Pancreatic Cancer Action Network. Julie asked me to share my story at a volunteer event later that summer where the organization was introducing Wage Hope to its core volunteers. I spoke, and I cemented my reconnection, just like that.

Today, I am a proud new member of the National Capital Area Affiliate of the Pancreatic Cancer Action Network, and it feels like I’m finally home. 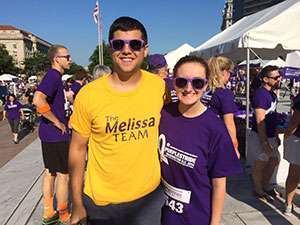 My mother’s fight isn’t over because her fight was never just about her. My mother may be gone, but I’m still alive.

Your brother, parent, cousin or friend may be gone or may be too weak to advocate for what they need. But we’re still here, and we’re still strong. And as long as we are alive, there will always be hope!

We can all commit to doing more. We can recruit more volunteers. We can find more sponsors for PurpleStride and other events. We can each, in our own way, carry on my mother’s fight to improve survival, to find a cure, to keep hope alive.