Stories of Hope  Survivors  Not Just a Patient – A Survivor

Not Just a Patient – A Survivor 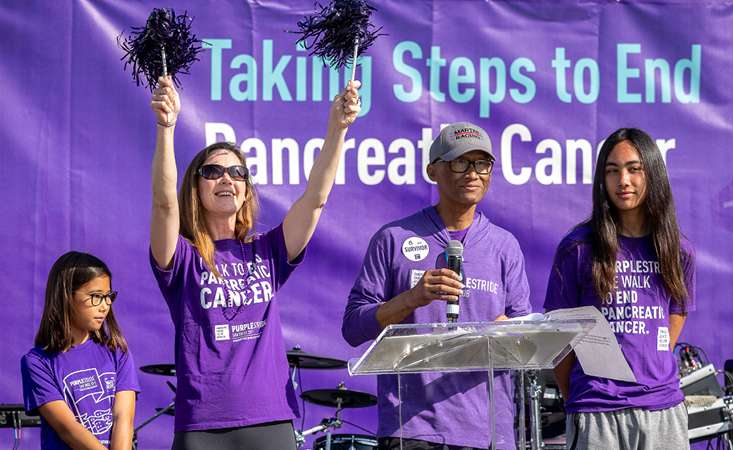 Robert Duran addresses the crowd at PanCAN PurpleStride San Diego with his wife, Liz, and children Tyler and Lauren.

Every Thursday, Robert Duran has a routine.

At 1:15 p.m., he goes to the University of California San Diego (UCSD) for chemotherapy to treat his stage IV pancreatic cancer.

“I ride it to the bike shop, which is a few miles down the street,” he said. “We meet to go on our 15-mile bike ride Thursday night.”

A rotating crew of cyclists have been meeting for years, often breaking out a grill and some drinks at the end of the ride for a catch-up session at the shop.

The camaraderie lifts his spirit – and the time on his bike recalibrates his body.

“When you are getting chemo, you’re tired and you don’t have energy,” he said. “I find that being able to go and ride my bike makes me feel so much more refreshed. It balances out the fatigue and the side effects from chemo.”

Whether it’s on roads or trails, the time spent outdoors brings him back to what matters – the present moment.

“It’s the endorphins that your body produces. You have the dopamine and you have all those hormones that make you feel better,” he said. “You’re basically cruising along in your happy spot the whole time.”

His Thursday night group is not the only riding Robert does. He’s known as “the cyclist” at UCSD because he often rides his bike back and forth to chemo treatments and doctor’s appointments – sometimes tallying 50 to 100 miles on his bike in any given week.

Robert’s been at it for eight years – through an initial diagnosis of pancreatic cancer in 2014, which was followed by chemotherapy, radiation and a distal pancreatectomy.

Two recurrences led to additional chemo, participation in a clinical trial and additional surgeries to resect the tumors.

When he found out his cancer had returned again (third recurrence) in September of 2021, he began another round of chemotherapy in preparation for surgery. He’s also enrolled in a second clinical trial to receive a targeted cell therapy called CAR-T, making him one of the first people to receive this type of treatment for a solid pancreatic cancer tumor.

When faced with uncertainty, riding gives Robert the tools – and the perspective -- to face the challenges ahead.

“When you mountain bike, if you have to put your foot down, you’re like, ‘oh man. What happened?’ But then you do it again. You power through it. You go over instead of around. You realize that it was so simple – and that every little accomplishment means so much.”

At PanCAN PurpleStride San Diego in April, Robert gave the keynote address. It was a moment that resonated for him, as after the COVID-19 pandemic prompted two years of virtual events, survivors were finally able to gather in person. His PurpleStride team, TEAM DURAN DURAN, raised over $19,100 to fund PanCAN programs like Patient Services and research initiatives that promise future improved treatment options.

“I always try to help those that are facing this terrible disease,” he said. “It takes a village. For everybody that has helped me survive and given me support and a guiding light, I try and give back. If it’s PanCAN Action Week, National Cancer Survivors Day, or any other event, I’m always willing to jump in and do what I can.”

It’s a journey that continues to change him – sparking the drive to make a difference.

“Cancer has made me into the man that I am today,” he said. “You just have to embrace every day.”

Here is the speech that Robert gave to a crowd of pancreatic cancer survivors, friends and family members gathered at Mission Bay Park for PanCAN PurpleStride San Diego on April 30, 2022:

I’m also an avid cyclist and mountain biker and nicknamed by some at UCSD as “The Cyclist” because during treatment, I would ride my bike 50-100 miles per week with some of the miles riding to and from chemo at UCSD.

I always dreamt that If I ever found myself speaking in front of hundreds or even thousands of people it would be because I received the MVP award for the World Series or Super Bowl – not because of pancreatic cancer.

I always dreamt that If I ever found myself on a giant billboard in the middle of Times Square, it would be because I signed a contract as a sponsored pro athlete for Nike – not because of pancreatic cancer.

I never thought I’d be asked to speak in front of huge a huge crowd as the guest pancreatic cancer survivor – frankly, I’m not really good at being the center of attention.

But I was asked to share my story, and just like how I overcame metastatic pancreatic cancer multiple times, I’m going to overcome my fear of being the center of attention to say a few words about why I’m here, in front of you all, on this emotional and amazing day. Thank you, all of you, for being here!

The truth is, and especially in the beginning, I was never comfortable calling myself a ‘pancreatic cancer survivor.’ Because at the time I was diagnosed, the survival rate was in the single digits and that is why I ALWAYS referred to myself as a pancreatic cancer patient instead of a survivor.

In 2014, I was diagnosed with locally advanced stage 3 pancreatic cancer, I started to get my affairs in order because at that time the five-year survival rate was only 6% -- which is why pancreatic cancer is also known as the ‘King of All Cancers.’

But hey, that was eight years ago and I’m still here as a four-time metastatic pancreatic cancer survivor!

My kids were young when my journey with cancer began. I remember Tyler was almost 6 years old and Lauren was not even 2 when I was diagnosed.

Throughout the past eight years, I have had several recurrences and gone through multiple rounds of chemo, radiation, a clinical trial and multiple surgeries.

You see, as a cyclist and mountain biker, I’ve never encountered a steep mountain where I stopped and turned back around because I quit. Quitting isn’t an option. That word simply is not in my vocabulary.

But the word LIVING is.

When I was first diagnosed, I told myself that I would live the next one to two years at 150% rather than living 15 years at 70%.

So I’m grateful for each and every day and I try to live life to the fullest, for you don’t know what tomorrow will bring or take away.

What helps me keep going is the enormous amount of passionate and caring support I’ve received along the way from my loving wife, family, community, PanCAN and UCSD.

And being a cancer survivor for all these years, I learned that this it is not all about me.

It’s about others and giving back to the community – the doctors, nurses, lab techs, administrators and schedulers that care for me (no matter what), my friends and neighbors who support me (no matter what), PanCAN, our sponsors, and everyone else that has given me the strength to survive and give hope to those who are currently battling pancreatic cancer.

It’s about surviving to be part of a movement that will ultimately help find a cure or better treatments methods and therapeutics that will yield better patient outcomes.

It’s about raising awareness and generating more funding to support cancer research so that more effective cancer treatments can be offered to all pancreatic cancer patients (no matter what stage they are in their diagnosis).

Last year, when I learned that PanCAN PurpleStride was going to be moved up from the fall to April, the timing was NOT particularly good for me. Because I had just recently learned that my cancer had returned for the fourth time and that I would have to undergo chemo (AGAIN) and possibly have surgery to resect the tumor (AGAIN).

I didn’t know where I would be with my treatment in the spring and if I’d be able to be here let alone standing up here speaking to you all.

So I’ve been on chemo for seven months now. And my life still hasn’t changed, I still ride my bike to UCSD to get my labs and chemo even though the cancer has spread to my right lung and liver.

Recently and as luck would have it, I was accepted into a trial here at UCSD (AGAIN) where I hope to receive a cutting-edge targeted cell therapy called CAR-T and I would be one of the first to receive this type of treatment for a solid pancreatic cancer tumor.

A few weeks ago, I lost a very good friend to pancreatic cancer. I promised him that I would continue the fight to wage hope to end pancreatic cancer and change the lives of those affected by it.

Someone once said, “You never know how strong you are until being strong is your only choice.”

Those words cannot be more true.

I’m not just a patient, I’m a SURVIVOR. And when I talk to others who are facing a pancreatic cancer diagnosis, I want them to know that they are not alone, there are survivors there is hope.