Editor’s note: Peter Suess passed away in September 2019, but his legacy lives on. We share his story here in hopes that it inspires others.

My story started in June of 2009.  I was feeling very sluggish while on vacation with my family in Galveston, TX.  I couldn’t take long walks on the beach because I was too tired. 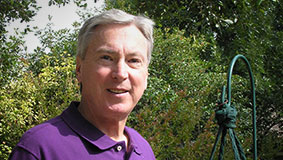 Besides the fatigue, I began to have other symptoms.  I had tremendous itching, some weight loss and my urine changed color. I called my family doctor because I thought I had a kidney or bladder infection. He noticed that I was turning jaundiced. He sent me to have a sonogram and a CT scan that showed a spot on my pancreas.  It was biopsied in August and it was confirmed -- pancreatic cancer.  PANCREATIC CANCER!!!!!!  We could not believe what we had just heard.  I got dizzy and nauseous.  Many of you have a date like this burned into your memory too.

At that point, all I knew about pancreatic cancer was that it wasn’t good, and I certainly wasn’t ready to die.  Patrick Swayze was on the cover of People Magazine. He died of pancreatic cancer and it scared me.

We were directed to a doctor who presented a plan of action.  My doctor recommended chemotherapy and then radiation with chemotherapy to shrink the tumor, followed by surgery.  I was lucky – my tumor shrank.  On December 29, 2009, I had the Whipple procedure, and then 12 more chemotherapy treatments.

That’s one hell of a surgery!  I came out of the hospital with 42 staples running down the entire front of my body.  I woke up in the middle of the night, scared that if I moved the wrong way my guts would spill out.  They did not and I healed up perfectly!

This treatment worked, for a while.  Then, in 2011, my cancer reappeared on the tail of my pancreas.  I had another surgery to remove more of my pancreas and my spleen.  Three more months of chemotherapy followed.  We hoped it worked.

It wasn’t easy.  I was supposed to have 12 treatments.  I struggled through the summer of 2012, and even spent four days in the hospital.  After the 10th treatment, I didn’t think I could do it anymore.  I had lost 100 pounds since diagnosis.  My family gathered around me and we all had a good cry.  Then we decided together, I MUST DO TWO MORE.  I did and on October 17, 2012, I had treatment number 12.  That afternoon, I started feeling better and I’ve felt better every day since. 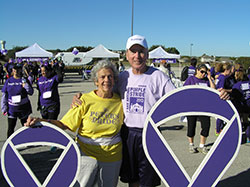 My scans through 2013 were clear and it was a wonderful treatment -free year.  ALL THAT I HAD BEEN THROUGH HAD WORKED!

My 2014 scans were not as kind to me. In February, a spot was found on my lung. Luckily it was removed by a RFA (Radio Frequency Ablation) through an outpatient procedure. No side effects. Complete recovery and back at the gym in a week.

In May spots were found on my liver again.  After looking at all options another chemotherapy treatment was the best option.  This chemotherapy is working.  The spots have decreased and my cancer marker has been greatly reduced.  I’ll be finished about November 5th.  This chemotherapy became available in 2012 and has been less toxic.

In these five years, I got to walk my youngest daughter down the aisle at her wedding.  I have held my two newest grandchildren.  A few months ago I was on a tube with my grandkids behind a ski boat during our family vacation.  On the last night we floated to the middle of the lake to watch the sunset – all 15 of us – TOGETHER!

My brother-in-law was diagnosed with pancreatic cancer 15 months after me.  He had the same treatments and the same surgery.  Unfortunately, his treatments were not as successful.   In May of 2013 he passed away from complications of pancreatic cancer.  As you can imagine, this was a devastating blow to our family.

So why did the treatment work for me and not for my brother-in-law?  Doctors tell us it’s the luck of the draw.  But here’s the real truth – there aren’t enough treatment options.  Yes, I am lucky!  But when we have more treatment options, there will be more survivors.  We create these options with money to fund research and clinical trials to find breakthrough, lifesaving therapies that will save lives.

I have learned to manage the enzymes I take before every meal, and the diabetes I developed following my surgeries and the 2012 chemotherapy.  I have regained about 30 pounds and go to the gym and/or walk several times a week.  Every day I get to celebrate being alive!

WE HAVE BEEN BLESSED!

You cannot fight this alone.  You need your faith, your family, a medical team you trust, friends and a positive attitude.

I want to give special thanks to the caregivers out there.  We could not get through any of it without you.

Everyone has to dig in for the fight!  We are in a marathon and not a sprint.  We must continue the fight so researchers can pursue new options to give people more time.  I am living proof that research works.

To quote Jimmy Valvano in his famous ESPY Arthur Ash Award acceptance speech — “DON’T GIVE UP!!!” – DON’T EVER GIVE UP!!!”