I learned a valuable lesson about this disease firsthand. In a weekly men’s group meeting  at my church, I watched one of my fellow members slowly decline in health, never realizing that he was suffering with pancreatic cancer. 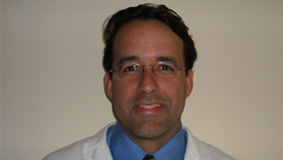 What surprised me the most was that despite studying this disease myself for over a decade, I could not recognize it in someone I had grown close to and known for several years.

It was devastating to have that knowledge but be unable to provide my friend with valuable insight concerning his condition years before his diagnosis. This encounter has reinvigorated my efforts at the lab bench to provide patients and clinicians with the prospects of detecting pancreatic cancer sooner while working to find effective therapies against this disease.

In 1995, I was introduced to pancreatic cancer by Dr. Eric Sandgren at  the University of Wisconsin.  At this time, being a naïve graduate student, I was unaware that cancer could even arise in the pancreas.  I was in for the lesson of a lifetime during the next five years as I became acutely sensitive to the need for greater research efforts in this field.

My passion quickly grew as I began to meet friends, family members, and survivors, which served to motivate my research efforts and keep me focused on pancreatic cancer.  In 1999, the Pancreatic Cancer Action Network was started, an event that could not have come at a more opportune time. The organization soon developed a unified message and became the vocal piece that continues to draw attention and support for patients and researchers fighting this disease.  Never did I think this outstanding organization would be so pivotal in my research and career development.

In late 2002, I began working at Northwestern University under the tutelage of Drs. Thomas Adrian and Richard Bell, two giants in the research field.  I was encouraged by Dr. Adrian to attend a monthly meeting of the local affiliate for the Pancreatic Cancer Action Network in the Chicago area.  There I met Valerie Powley, Linda Szramiak, Terry Pastika and Kim Giovanni, whose lives were touched by this disease, and I began to actually feel their frustration with all that was lacking in detection and treatment options.

At times, I was embarrassed and choked back tears when I was unable to answer sometimes simple questions concerning this disease, like “What are the risks for pancreatic cancer besides smoking?” and “What set of genetic changes lead to pancreatic cancer?”  These types of interactions, though very humbling, helped build my research focus, particularly at the level of formulating projects for funding applications.

One of these projects was honored with a Pancreatic Cancer Action Network Career Development Award in 2007. This award was strategic in providing funds to run this project while demonstrating recognition in the field in order to strengthen my petition for federal funding, which I received shortly after this award was bestowed.

Research dollars are hard to come by in general, but are particularly elusive for young investigators. The Pancreatic Cancer Action Network’s efforts to raise money for research provides seed money for young scientists, encouraging their participation in the pancreatic cancer research field.  This seed money is invaluable for developing ideas and collecting critical preliminary data that can be used to appeal for larger research funds, usually at the federal level.  This model has worked very well for me and many other junior-level investigators.

For those of you whose world has been shaken by this kind of diagnosis, there is hope.  The last 5 to 6 years have seen an explosion of research focused on pancreatic cancer, its causes, and developing the means to detect and treat this disease.  This is a direct effect of more research dollars being directed to initiatives which the Pancreatic Cancer Action Network has spearheaded.  As these trends continue, new data has already begun to impact the pancreatic cancer community, and I anticipate changes that are occurring now to be visible in increased survival rates during the next few years.

My prayer for you is that with God, all things are possible. Keep up the good fight!