My journey to pancreatic cancer research is an unusual one. In graduate school, I was trained in a DNA laboratory that was focused on basic molecular biology, and not really that concerned with cancer in general. 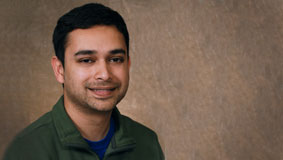 After I received my degree, I was looking for a post-doctoral position and stumbled upon a scientific paper from Dr. Tim Yen’s lab in Fox Chase Cancer Center, where some beautiful experiments were being performed visualizing live cells in the microscope using fluorescently-labeled proteins. I joined the lab as a post-doctoral fellow to learn cellular biology techniques and to do some microscopy experiments to scrutinize living cells.

As I started my post-doctoral career in the Yen lab, I was told about an exciting large-scale experimental project that was available for me to work on. The project entailed systematically blocking the expression of all of the genes in the cell to see which single-gene deletions sensitized pancreatic cancer cells to a low dose of the chemotherapeutic drug gemcitabine. No one in the lab wanted to take on a whole genome screen because of the time involved and the riskiness of the project, because there was a chance that we would only get negative results. Being new and naive, I jumped at the chance to be involved in this project. I knew nothing about pancreatic cancer or the drug gemcitabine. However, I read all that I could find in the scientific literature about those two topics.

The original analysis consisted of turning off the expression of 23,500 gene products one by one, then treating the cells with a low dose of gemcitabine. I defined genes as “sensitizers” if lowering their levels killed pancreatic cancer cells in the presence of gemcitabine. From the primary investigation, we got a hit-list of 125 genes that seemed to be good sensitizers of pancreatic cancer cells to gemcitabine. At this point, I heard about the Pancreatic Cancer Action Network and the Fellowship Award that it offers to support young researchers in pancreatic cancer research. I applied and proposed to analyze the 125 genes from our primary results. The plan was to utilize our live-cell microscopy tools available in the lab to understand the cell death caused by gemcitabine.

In January 2010, I received a phone call in the lab saying that I received the Fellowship. I was extremely encouraged by this award because I was not a pancreatic cancer researcher at that time. It was very gratifying to know that really established scientists in the field thought that our work was worthwhile. I jumped in to validate my targets and do the microscopy experiments. That fall I went to the Pancreatic Cancer Action Network gala and for the first time met actual pancreatic cancer patients, survivors, and their families. This made the disease very real for me. I decided that weekend that I wanted to make pancreatic cancer research my career and contribute something to the field that would have a positive impact in the fight against this deadly disease.