The most difficult part of tackling what seems to be an insurmountable problem is getting started.

When I reflect on pancreas cancer, pancreas cancer research and the current state of events regarding the disease, it is clear that we are off and running.  I am proud to report that I have bore witness to an exponential explosion of progress in the fight against pancreas cancer.  Each month, I become ever more hopeful that a major breakthrough is within reach. 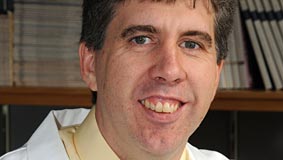 As a very young child, I lost my grandfather and a cousin to cancer.  I had a wonderful childhood, but I always wondered what I missed by not getting to know these two individuals.  I started college and then medical school with the idea that cancer was a problem worth tackling.

During my training, there was great pessimism surrounding pancreas cancer.  There was a lack of progress, a lack of funding and a general acceptance of the dogma, “If you want to succeed in academics, you certainly did not want to mess with the pancreas.”  There were examples of those who tried and failed.  As I explored my options, I had the privilege of learning from some thoughtful mentors and courageous patients, and I came to the conclusion that I might be pig-headed enough to tackle pancreas cancer as a career.

After training in surgical oncology and research, I was very fortunate to find departmental support and a position at Washington University where they were willing to take the risk on such research.  I found initial grant support from organizations like the Pancreatic Cancer Action Network and the American Cancer Society that were also willing to take a risk on some “outside the box” ideas and with a young investigator like myself.  Without such support, it is very hard to generate the preliminary data needed to compete for funding on the national level.  I remain grateful to the Pancreatic Cancer Action Network for taking a risk on me.

Initially, it was pretty easy to keep up with the field.  If there was a good scientific article on pancreas cancer once or twice a year, I was excited.  There was very little interest from industry.  Currently, I can not pick up a journal and not find an article focusing on this problem.  Currently, I get monthly invitations from large drug companies to share ideas, or to try new drugs in our animal models or in patients.  There is renewed interest in the approaches we are trying in the lab from companies and governmental funding agencies in our research efforts.

When I face my patients, I am able to tell them that the “race is on” and that we are making efforts across the board.  We have programs focused on prevention and early detection so that we can catch the disease before it happens or while it is treatable.  We have studies focused on every aspect of treatment including genetics, proteomics, immunology and novel drug development.  Patients are ever more willing to participate in clinical trials.  Foundations and other organizations continue to support us and statistics show a one percent improvement in the overall survival rate for patients with pancreas cancer.  This increase is modest, but it is the first increase we have seen.

Nobody expects this to be a short race and nobody in our business expects to win it alone.  This is a marathon relay where the baton is passed back and forth and occasionally dropped.  Progress happens through lots of uphill toil, occasional wrong turns and those glorious downhill sprints.  Those of us committed to the race hope that the momentum we have gathered carries us through some of our foreseeable stumbling blocks like the current economic downturn.  We continue to depend heavily on the charity of the American citizens, private foundations and the political activism of the family members of those lost to the disease in order to support our efforts and sustain the growth we have seen in the field of participants.

I believe we have already accomplished the hardest part.  We are off the sofa and out the door.   While it is still early in this race, we are gaining momentum, our form looks good, and we are determined to win.