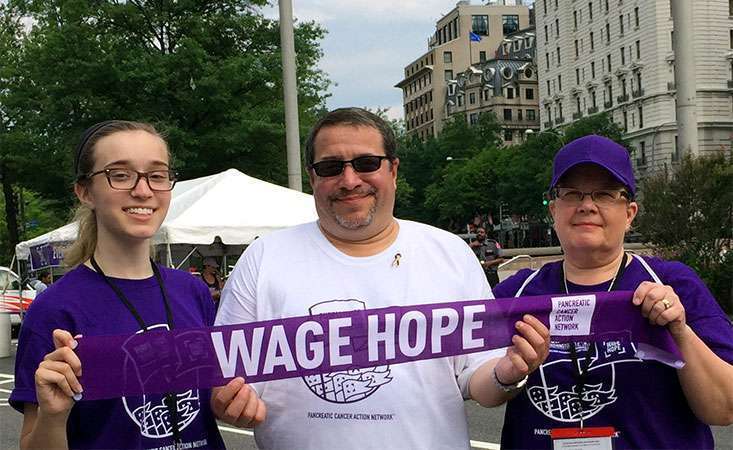 Charles Bogino and wife Cindy with their daughter Eva at PurpleStride

In fall 2013, Charles Bogino was going in for what he believed to be a routine exam. His physician was looking for something to explain Bogino’s high liver enzymes. Pancreatic cancer was never considered.

After his initial appointment, Bogino received a recommendation from his doctor that he should get an MRI (magnetic resonance imaging). He went in for the scan that December.

Receiving results that were inconclusive, Bogino was told that an endoscopic procedure was needed. After the procedure, doctors were finally able to give him a diagnosis: pancreatic cancer.

His tumor was located at the head of his pancreas and fortunately, it was caught at a very early stage. Catching the disease early is rare for most pancreatic cancer diagnoses. 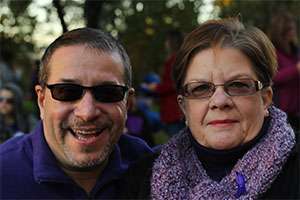 Bogino had experienced occasional abdominal pain, which he attributed to gallstones. He would never have expected it to be a symptom of pancreatic cancer, especially since his family did not have a history of cancer.

Because the disease was caught at an early stage, Bogino was able to have a Whipple procedure in April 2014 to remove the tumor. It was successful, but he was not out of the woods.

Bogino had almost every complication possible after his surgery. But he had served in the Army, so he was used to facing what would seem to be unbeatable hurdles.

“I was among the lucky few – all too few. My tumor was caught early. Notwithstanding serious complications from the [Whipple] surgery…I’m pretty much all better now,” Bogino said.

“So, I guess I could just walk away. The fight should be over, right? Why should I care? Well, it got sort of personal. And I happen to have gotten to know people who haven’t been quite as fortunate as I have.”

Prior to his surgery, Bogino had been researching the internet for information about the disease and came across the Pancreatic Cancer Action Network (PanCAN). He learned about National Pancreatic Cancer Advocacy Day and wanted to attend. 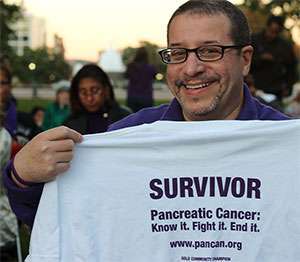 Bogino has now become a volunteer for PanCAN, working with the National Capital Area Affiliate in Washington, D.C. He has spoken as a survivor at PurpleLight and PurpleStride, the walk to end pancreatic cancer and a PanCAN signature event, to share his incredible story.

Initially, he wanted to participate for himself. But after sharing his experience with pancreatic cancer, more and more people revealed with him how their lives or their loved ones had been impacted by the disease.

“As one of the fortunate few who managed to dodge the worst this particular cancer has to offer, and having met so many fighters along the way, I feel an obligation not only to those who are not in as fortunate a position, but also to all the friends I’ve met who’ve lost loved ones to this disease.”

This June, Bogino is participating at PurpleStride Washington, D.C. 2019, presented by the Washington Capitals with Premier Sponsor Judy and Peter Blum Kovler Foundation. As more people become impacted by and aware of pancreatic cancer, these events make it clear that more needs to be done to raise funds for research.

“My motivation to get involved with PanCAN stemmed from the fact that, following my diagnosis, I found friends reaching out to tell me the stories of their fathers and loved ones who died of pancreatic cancer. I was surprised at just how many,” Bogino said.

The low five-year survival rate of just 9 percent in the U.S. adds to Bogino’s fuel for making a difference and sharing his story, especially for those who cannot.

“The five-year survival rate for pancreatic cancer, in a word, stinks. It’s a rather mysterious cancer. It has vague symptoms which make it hard to diagnose early. I’ve decided that I won’t be walking away. This disease needs as many advocates as possible. I will tell my story to all willing to listen. I intend to persist in drawing attention to this cancer in the hopes that it will raise awareness and money, so that, together, we can end it once and for all.”

If you are in the area, join Charles Bogino and thousands of others at PurpleStride Washington, D.C., on Saturday, June 8, at Freedom Plaza. If you are unable to make it, find a local PurpleStride and help improve the lives of all those impacted by this disease.
Share  Tweet
More on:
You may also be interested in...