Editor’s note: Larry Clark passed away in May 2018, but his legacy lives on through his profound impact on the pancreatic cancer community. We hope his story, shared here, inspires others to Demand Better for everyone affected by pancreatic cancer. 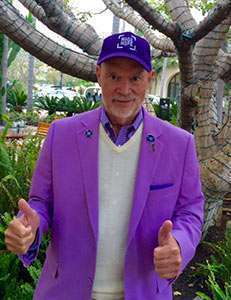 Larry Clark has battled pancreatic cancer multiple times in the three years since diagnosis. Today, feeling powerful and strong, he fights back by supporting the cause in numerous ways.

Looking back on it now, everything was good and going right in early 2012.

I had completed an incredibly rewarding 40-year career in our federal government, working on many of our nation’s most important national and international security space and communications systems acquisition programs while holding several senior executive positions within the Air Force, National Reconnaissance Organization (NRO) and North Atlantic Treaty Organization (NATO). Protecting our country from the enemy, as it were…

Also, I had dedicated 20 years of civic service in my community and California, holding various appointed and elected positions, including mayor of the beautiful coastal community of Rancho Palos Verdes in Southern California.

I was looking forward to new and exciting things in retirement: Long-overdue international travel, equally long-overdue home remodeling projects and spending much more time with my loving wife, Becky. I envisioned plenty of rounds of golf with friends. Life had already been so good, and now, in retirement, it was going to be fantastic.

But retirement had other plans for me: Within one year, “fantastic” turned into “life-altering” when I was met with a different kind of enemy – pancreatic cancer.

That was in March 2013. I happened to be among the fortunate few after diagnosis to immediately undergo successful surgery to resect my pancreatic cancer tumor and then again fortunate to be accepted into a Phase III national clinical trial at the Cedars-Sinai Comprehensive Transplant Center in Los Angeles, where I received a breakthrough pancreatic cancer vaccine. From the time of surgery until the end of my immunological trial in May 2014, I was in remission.

I was feeling great; back to my old self. 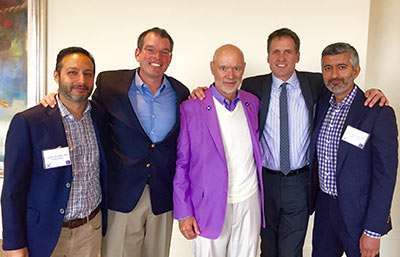 Larry Clark, center, with his pancreatic cancer “Dream Team” from Cedars-Sinai Medical Center. To the right is his surgeon, Dr. Nicholas Nissen.

But that changed when my cancer returned in the liver just a few months later. I became a stage four pancreatic cancer patient/survivor.

And my war with a different kind of enemy was on.

Now is probably a good time to tell you that I’m known among family and friends as “L.L.” Not as in Cool J, but as in “Lucky Larry.” Luck has always seemed to follow me (particularly with finding parking spaces easily, which, in Los Angeles, is considered very lucky!). To complement my parking karma, I (luckily) developed great physician karma because shortly after diagnosis I had been connected with Dr. Nicholas Nissen, a nationally recognized pancreatic cancer surgeon from Cedars-Sinai, and someone whom I now call friend.

I can’t stress how important it is to consider clinical trials as part of pancreatic cancer treatment considerations. It’s part of why I’m alive and doing well today, along with Dr. Nissen and my “Dream Team” of specialists who collaboratively have come up with advanced and novel treatment approaches to combat my aggressive pancreatic cancer.

Over the past two years, I’ve endured several surgeries and procedures to fight my cancer recurrences. But today I feel good, positive and hopeful, and I continue to remain strong and relentless in my pursuit to beat the odds and do what I can to support others fighting this disease.

In fact, I realized early on the importance of a fighting spirit, and I committed myself to joining the bigger fight against pancreatic cancer. My family, friends, and I Wage Hope every day in the fight against this disease that has now surpassed breast cancer as the third leading cause of cancer-related death in this country – a stunning statistic from the American Cancer Society.

In November 2013, I was humbled and honored to be selected by the Pancreatic Cancer Action Network to receive its “Spirit of Hope” award, which honors the courage of pancreatic cancer patients and the hope and inspiration they embody. 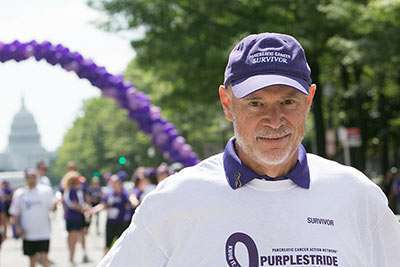 Larry Clark, along with friends and family, participates in and fundraises for PurpleStride each year.

I am also honored to be a national ambassador for the Pancreatic Cancer Action Network, raising awareness and critical research funding.

In 2014 I served as chair of the executive committee for the Pancreatic Cancer Action Network’s annual PurpleStride Los Angeles event in May, where we raised over $350,000. Last year, under the leadership of Dr. Nissen, who was at the helm of the executive committee, we raised $550,000. This year we’re aiming to be the top PurpleStride in the country!

I hope that my journey can serve as an example of hope and courage and inspire others to believe they can win their fight, too.

But when you embrace the enemy, it changes everything.