Pancreatic Cancer News  Survivors  It Starts with Someone: Yohannes Gebreysus

It Starts with Someone: Yohannes Gebreysus 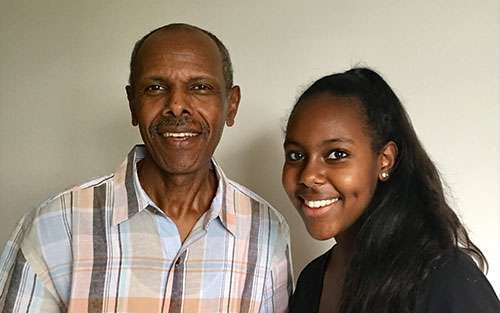 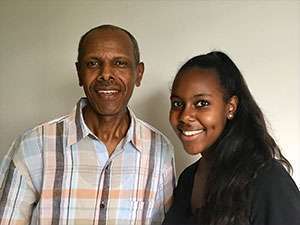 In less than two years, she’ll be off to college. It’s hard to believe it’s been 10 years since Gebreysus  was diagnosed with pancreatic cancer and Absera was just 5.

He had been about her age when his own father had passed away.

“I didn’t want Absera to grow up without a father, like I did,” he said. “I was concerned for her future, since we don’t know what causes pancreatic cancer.”

This is a big reason he is a Pancreatic Cancer Action Network (PanCAN) advocate and volunteer.

“My mission is to educate people about this disease and to let people know, especially other survivors, that there is help and there is hope. I’m lucky and blessed to be able to do this.” 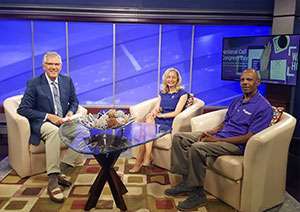 One of the highlights each year for Gebreysus is attending National Pancreatic Cancer Advocacy Day in Washington, D.C., which he’s been doing since 2010. This year, he was able to reach a larger number of people with a message of hope when he was tapped by PanCAN to participate in a radio interview with CBS in Washington during Advocacy Day.

Opportunities like these, as well as attending PurpleStride, held around the same time as Advocacy Day in Washington, inspire him.

“It gives me hope to see people come to PurpleStride and Advocacy Day – and to see so many survivors who are speaking out and bringing more attention to this disease. We’re one community…one family.”

Gebreysus lives in the Washington, D.C., area and volunteers with the local affiliate, too. As part of volunteering, he educates people about pancreatic cancer symptoms, risk factors, clinical trials and more. Like so many others’ stories, Gebreysus’ pancreatic cancer diagnosis was delayed.

He was having back and abdominal pain, but his doctor diagnosed heartburn and gave him a prescription for it. Surprisingly, that helped for about five months, but the pain came back with a vengeance. He made an appointment with a gastroenterologist, who ordered bloodwork and X-rays. 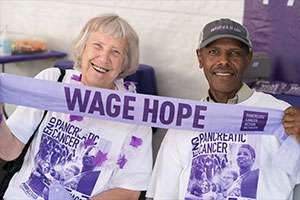 “It looks like cancer, but I want to make sure,” the specialist had said. “I want you to get an MRI.”

Gebreysus immediately had the Whipple procedure, and about the same time, his only child was turning 6.

Absera’s name means “a gift of God,” and for Gebreysus, being here today is also a magnificent gift, he said.

“I’m lucky to be alive, so I want to do everything I can to help PanCAN increase the survival rate. This is important not just for me, but for patients and families who will come after me.”