In January, 2012, I was having some digestive problems that seemed different from my routine 65-year-old issues.  On Monday, January 30th, I asked my doctor to run lab work to check for an intestinal infection, even though I was feeling better.  Early Tuesday morning, the doctor called.  I had very elevated liver enzymes and needed to get a CT scan as quickly as possible; the CT scan was done that afternoon.  My husband and I had commented that if we didn’t hear anything for several days, then there was nothing serious going on.  But first thing Wednesday morning my doctor’s office called to set up a consult for Wednesday afternoon; we knew that we weren’t going to hear good news, but I never suspected the diagnosis I received-probable pancreatic cancer.  A tumor was detected on the head of my pancreas and another spot on my liver.  Wednesday afternoon and all day Thursday were long days.  My mind was constantly racing with “what ifs.”  But by that Friday, I was a cancer patient at cancer center specializing in pancreatic cancer.  It moved just that fast. 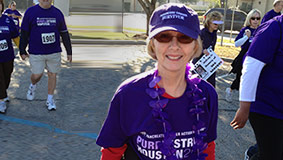 My oncologist very quickly began to connect me to other pancreatic cancer specialists.  The tumor in my pancreas was blocking the bile duct, which was responsible for the elevated liver enzyme levels and why I was becoming jaundiced.  Within two weeks I saw an endoscopic surgeon who scoped me in order to open up the bile duct and to get a tissue sample of the mass in my pancreas, confirming the initial pancreatic cancer diagnosis.  The second specialist I met with was a gastrointestinal surgical oncologist who educated us on the Whipple procedure, my future surgery.  From that point and the rest of 2012, things were a blur; our (mine and my husband’s) schedules revolved around the cancer center.  After having a port implanted late in February, I began a very aggressive chemotherapy treatment.  The four treatments lasted three days each; six hours in the infusion chair followed by 46 hours attached to a portable, battery-powered infusion pump.  In May I began 10 sessions of radiation with oral chemotherapy.

Another CT scan and PET scan showed no evidence of cancer any place other than my pancreas.  The spot on my liver was determined to be a cyst.  My surgeon even scheduled me for a laparoscopic exam just to make sure.  I was cleared for surgery and told to train to insure my physical condition was as strong as I could make it.  I had six weeks of normal life without any treatment before my Whipple surgery in July.  Six weeks later the tumor and a significant portion of my pancreas were removed, an additional six chemotherapy treatments were recommended as a preventative measure.  I can’t tell you how many times I wanted to quit, but my husband encouraged me to go on.  I had four of the six treatments before my body could take no more.  Recovering from surgery was difficult enough but compounded with additional chemotherapy was extremely challenging.  BUT I GOT THROUGH IT!

It took me over eight months to recuperate from surgery and chemotherapy.  I am stronger physically and mentally every day; I (and my husband) walk 3 1/2 miles five days-a-week.  I continue to have a CT scan every four months; we can both feel the stress building up as I get closer to the next scan date on the calendar, but I continue to be cancer free.  I have become a sounding board to others who are facing this dreadful disease and who just need to talk to someone else who has been there.  We are active with the Pancreatic Cancer Action Network, including participating in PurpleLight, PurpleStride (Team Gratitude), and one-on-one with those in need.  My best advice: listen to your body and trust your instincts.