In the fall of 1999, my brother-in-law was found to have a mass in his pancreas. After an unsuccessful Whipple surgery, he enrolled in a clinical trial using radiation plus chemotherapy. This shrunk the tumor so a second Whipple surgery was successful.  He lived 12 more years and passed from stomach cancer. 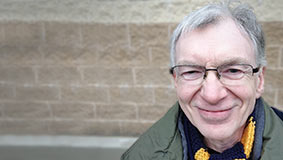 Then, in January of 2013, I had a CT scan following abdominal surgery that showed a mass on my pancreas. After a biopsy confirmed that this was cancerous, I was enrolled in a clinical trial consisting of chemotherapy before and after surgery. It has now been two years since that first CT, and all exams to date have been clear.

I am thankful that the best trial for me was at my local hospital. I did contact PanCAN Patient Services at the time, and they responded with the same trial. I have also had great support from my wife and daughter throughout this whole journey. I encourage everyone with this disease to enter a clinical trial if possible.