It was only this year, when I was fundraising for my first PurpleStride, that the majority of my friends found out I was diagnosed in 1996 with pancreatic cancer.

I was 32 years old.  I exercised regularly, ate healthy, and had no family history of the disease.  My daughter was only 2 at the time.  How could this be happening to me?

I couldn’t keep any food down, I was very lethargic, and I had excruciating stomach and back pain.  The primary care doctors couldn’t determine the cause of my illness.  Maybe it was food poisoning, maybe it was a stomach virus… 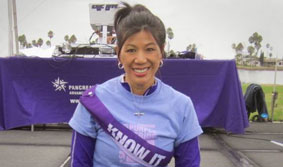 After several weeks of not getting better, I was finally referred to a gastroenterologist.  She would not give up on me.  She was my savior!  After six months of being poked and prodded with countless tests such as ultrasound, endoscopy, colonoscopy, sigmoidoscopy, octreotide scan, CT scans, and MRIs, they confirmed what the gastroenterologist suspected; I had a neuroendocrine tumor the size of a golf ball on the tail end of my pancreas.

I was so fortunate that surgery was an option for me.  The operation was scheduled within a few days.  My surgeon discussed the strategy he wanted to take.  He would attempt a laparoscopic distal pancreatectomy – a procedure that was never before performed on a pancreas.  He warned me, though, that if he encountered any problems he would switch to the more invasive surgery.  My surgeon was extremely patient and did not give up on the laparoscopy.  The surgery lasted six hours and was a success.  It took about eight weeks to recover from the surgery and I was lucky that I didn’t require additional treatment.

My emotions were very mixed.  I felt humbled and blessed, but also guilty that I did not have to endure the additional uncertainty felt by so many affected with this disease.  I wanted to run as far away as possible from the label of having “pancreatic cancer.”  I wanted to feel normal.  I didn’t want to be associated with the stigma.  And I did not want to be defined by this disease.

I quietly went to my gastroenterologist annually for 10 years to monitor any recurrence of the cancer.  At my 10 year anniversary, I celebrated by training and participating in my first triathlon as part of a group called Team Survivor.  It was then that I felt I could finally call myself a survivor!

It’s been over 17 years now as a survivor and I have come full circle.  After PurpleStride, I decided to be a passionate advocate for those struggling with this condition and for those who may be diagnosed with this disease in the future.  I have committed time to volunteer as the San Diego Affiliate Coordinator for the Pancreatic Cancer Action Network where I plan on making a difference!