Hoping my journey gives hope to the many who come here seeking comfort with a later stage pancreatic cancer diagnosis.  On July 7, 2011 I was diagnosed with inoperable stage IV pancreatic adenocarcinoma with metastases to my liver.  My primary oncologist here in San Jose, CA, is not a pancreatic specialist, but an oncologist for 17 years who understands cancer in women. 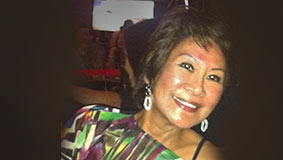 She initially prescribed a traditional form of treatment with the least amount of side effects to keep me comfortable, which included a pill form of chemotherapy in conjunction with radiation.

My husband, Jeff, and I wanted to explore other options from a higher institution of learning where extensive research in pancreatic cancer is conducted.  My primary oncologist referred us to her colleague at a high volume hospital for pancreatic cancer in San Francisco, CA, with whom she worked some 10 or more years ago at another high volume hospital in Palo Alto, CA.  After reviewing my physical condition and age, the oncologist in San Francisco offered me the choice between two clinical trials and a combination of four drugs available outside of a clinical trial.  After careful consideration, I chose the four drug combination.  Out of all the options offered, this was the most aggressive form of treatment.

I began treatment in August of 2011 at a rate of one 48-hour infusion every other week and ended up tolerating 19 sessions in 10 months without a break.  For some odd reason my blood cell counts never indicated I needed a break, so my oncologist kept me moving forward with treatment.  After the first six months of treatment, the 5 cm tumor (at diagnosis) on the body of my pancreas reduced in size to 4 mm and the two spots measuring approximately 1 cm each on my liver disappeared and never returned.  I continued treatment for an additional four months at a rate of one 48-hour infusion every three weeks and in June, 2012 after 10 months of chemotherapy, I received my first CT scan indicating there was no evidence of new or progressive metastatic disease and no tumor recurrence.

My husband and I re-visited our consulting specialist in San Francisco and he ordered all treatment to be discontinued.  He encouraged me to begin living life and prescribed that I monitor liver panels and CA19-9 once per month with a CT scan quarterly.  It has now been over two years since diagnosis and over one year since being declared NED (no evidence of disease).  Since June, 2012, I continue to have stable quarterly CT scans and monthly blood work to measure liver panels and CA19-9.  The only medications I am currently taking are a one for my liver and another to treat type 2 diabetes.

Last year, in December, I ran my first 10k event and re-enrolled in a local fitness center where I currently perform cardiovascular, strength endurance and weight lifting training daily, sometimes 6 days-a-week.  I’m in better physical shape today then I was prior to diagnosis.