I had been having infrequent bouts of severe abdominal pain (roughly once or twice each year) over a period of four years.  The pain would resolve itself in 24-48 hours, and I always attributed it to something I had eaten.  I had had a colonoscopy/endoscopy, and annual physicals, but they did not reveal anything out of the ordinary. 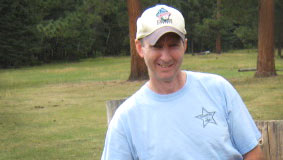 In July 2012, after having an additional episode of abdominal pain only a few weeks after having a previous one, my family convinced me to go seek medical attention for the pain.

A CT scan revealed lesions on my pancreas and liver, which would later be diagnosed as inoperable, stage IV pancreatic neuroendocrine tumors.  Doctors were matter-of-fact about my condition, but encouraged me to enjoy life, and do the things I wanted to do.  Family, friends and acquaintances (including PanCAN Patient Services Survivor and Caregiver Network survivors) have given me support and best wishes.  My wife keeps reminding me “you don’t have an expiration date.”  The hormone therapy I am undergoing has so far kept the cancer at bay, which keeps me optimistic.  I intend to live many more years, and to be around when a cure is ultimately found for pancreatic and other forms of cancer.