On June 24, 2007, I turned 45 years old.  I had just been diagnosed with diabetes and was starting to itch like crazy for weeks.  On July 17, 2007 I had a follow up with my cardiologist and everything looked great, except for this crazy, ugly, “bottled tan” look.  My doctor ordered blood work and a CT scan. They found a blockage in my bile duct and recommended an ERCP. 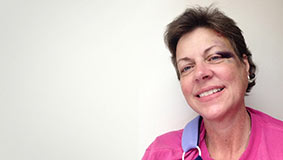 So, on July 24, 2007, I had the ERCP and my doctor found a tumor.  He came in to the recovery room and I knew immediately there was something wrong.  He said, “I have found a growth, but 10% of the time it is benign.”  My husband didn’t understand what he was implying so I calmly turned to my husband and said, “Terry, he is saying I have cancer.”

And this is where my battle began.  It was a hard, physically draining war, but I ultimately WON the War!  I am almost seven years out from my diagnosis and have been deemed “CURED”!  I am totally and completely disease free!  God gave me early symptoms, diagnosis, and the world’s greatest doctors on my side.  I think each day it is just like the “Footprints in the Sand.”  My almighty Lord carried me through when I needed his strength to make it and still be here today!