In September, 2009, after four months of doctor visits, blood tests and finally an endoscopic procedure, we were told that I had a tumor on my pancreas. Like so many others, I really did not know much about my pancreas, what its function was, and how it worked with my other body organs. But once I learned most people diagnosed with this cancer do not survive longer than 12 months, the doctor had my attention. As a career police officer for the past 32 years, death was an issue I have mentally accepted as a very real possibility. Death by cancer was not something I had thought about even though members of my family, as well as close friends, have lost their battles with cancer over the past few years. My chances for survival hinged on my ability to survive a very hard medical intervention called the Whipple procedure. 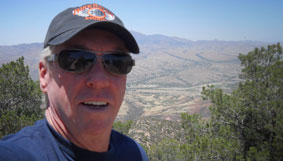 After another six months I did recover enough to start an active physical workout routine at my local YMCA. I also got strong enough to start riding my motorcycle again, even riding with my portable chemotherapy pack for several months. The gym and the cycle helped with both mental and physical growth. Finally, I applied to, and joined, a clinical trial for new pancreatic cancer therapies using one’s own immune system to hinder tumor growth. After 16 months of treatments, I have great CT scans and blood tests. Now, four years later, I have regained 30 pounds of lost body weight, go to the gym five days each week and have ridden over 35,000 miles on my motorcycle across 40 states. Life is short, play hard.