My journey with Pancreatic Cancer officially began on March 5, 2007. As I awakened from a biopsy procedure, I was informed by the physician that I had adenocarcinoma in the head of the pancreas. While not yet fully awake from the procedure, what he said didn’t seem totally unexpected. Thinking back to the previous four months I could see there were some subtle changes in my health. 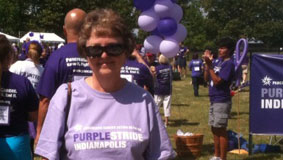 During the Thanksgiving and Christmas holidays, I was feeling unusually tired but thought this was due to working full time, holiday preparations, and caring for my aging father. But, after the holidays in addition to the fatigue, I began to experience vague digestive symptoms such as fullness in my stomach after eating even small amounts of food and then a loss of appetite. In early February of 2007, my symptoms prompted me to see my primary care physician.

My primary care physician ordered an ultrasound of my liver and pancreas. The results, along with lab results, showed possible pancreatitis. I was then sent for a CT of the pancreas which showed enlargement of the head of the pancreas and multiple swollen lymph nodes in the abdomen -- no evidence of a tumor. At this time my physician referred me to our university medical center where I saw a gastroenterologist. He felt that my symptoms and history were not significant for a GI cancer, but he wanted me to have further testing to find the cause of my symptoms. I had the EUS procedure completed on March 5, 2007 where the biopsy results showed adenocarcinoma in the head of the pancreas with a tumor measuring 2.0 cm by 2.6cm in size.

I tolerated the EUS procedure well, but unfortunately, the next day intense itching and jaundice started. I then had an ERCP to have a stent placed in my bile duct to relieve the obstruction caused by pressure from the cancerous tumor in my pancreas. Referrals were then made to a surgeon specializing in pancreatic cancer, as well as to medical and radiation oncologists. At this time I was asked if I wished to participate in a clinical trial looking at a new protocol for initial treatment of pancreatic cancer. This protocol focused on an intense two week treatment of radiation, chemotherapy and targeted therapy. The treatments left me with extreme fatigue, nausea and loss of appetite, but with the aid of medications I was able to tolerate the treatments without significant problems.

After recovering from the radiation and chemotherapy, I had the Whipple surgery on May 4, 2007. The surgeon told me the treatments I received in the clinical trial had decreased the size of my tumor by 2/3 the original size at diagnosis and that there was no evidence of lymph node involvement. As the surgeon said, it was “a best case scenario for someone with pancreatic cancer.” However, even with this good outcome, I was told that the average life expectancy with these results was 22 months.

In July 2007, after recovering from surgery, I again started on chemotherapy for six months. Overall, I tolerated the chemotherapy well with some nausea, loss of appetite and fatigue. Thankfully, medications greatly helped with side effects of nausea. During this time I had frequent visits with my oncologist, CT scans and labs -- all showing positive progress -- no recurrence of cancer.

There is no evidence either way as to whether or not the pancreatic vaccine has prevented the recurrence of my cancer or if this is the natural way my cancer would have progressed without the vaccine. As a retired nurse, I feel strongly about the positive benefits of medical research and I personally believe that I am still alive and feeling well due to the results of both clinical trials.