My name is Richard Blish, a three year survivor so far (no clouds on the horizon). I was diagnosed with pancreatic cancer in August 2009 (age 67 then) and crushed to read its prognosis on the web. 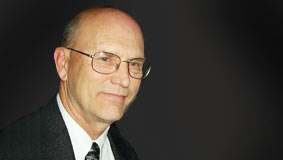 My daughter Catherine, who has an MD plus a PhD in Immunology, then doing AIDS research, was even more appalled at the prospects, so she spent a week researching what my best path should be. We didnt know that PanCAN Patient Services existed at that time. As the prognosis was so poor (mortality in 3-6 months), we were in a BIG hurry to select a treatment option and get started. One complicating factor was that a young doctor, who installed a stent for bile to bypass the tumor, provided an erroneous input that was rectified by a senior doctor. I was erroneously told my small (Stage 1A) tumor was not resectable, i.e. surgery would not be an option. The lesson here is a familiar one: get a second opinion!

My daughters research suggested that there are top volume centers for pancreatic cancer in Seattle. As my daughter was living in Seattle, the physical path decision was easymove in with my daughter and her two small therapy machines, the granddaughters.

As an aside why did I mention statistics? I have a PhD in Materials Science and worked in semiconductor reliability for more than 40 years. I also had a history of high blood pressure, so many years ago I created a spreadsheet to capture such details as blood pressure, weight and exercise statistics on a daily basis. Armed with these data, I can pinpoint the date at which pancreatic cancer started! This date was about 6 months before diagnosis, so if I had been watching the trends more vigilantly, perhaps I would have had more warning. The signal was that starting in February my average output on the bike was consistently declining. The crash came in August, when I lost weight, appetite, stool turned loose and blonde and finally I was jaundiced. Clearly the lesson is to pay attention to what your body is telling you!

When my wife Sue and I reached Seattle, we selected a Phase II clinical trial at a leading treatment center for pancreatic cancer. I was extremely impressed with the statistics and the mortality prospects for a course of chemo, followed by radiation, Whipple surgery and more chemo. The entire process was successful. Contributing factors were the protocol was good, my attitude was that treatment would be successful and family support was outstanding. In fact, using chemo and radiation had two great benefits: any undetectable remote metastasis sites were killed and the main tumor size was reduced, providing more margin for Whipple surgery. Later there were a couple false positives (PET scans) after the intensive year-long treatment, but all came out well.

So the bottom line is that pancreatic cancer can be beaten, particularly if you avail yourself of PanCAN Patient Services and consider enrolling in a clinical trial.