In January of 2012, just a few months after my 40th birthday, I was diagnosed with pancreatic cancer.  At the time of my birthday, I was feeling very tired and having digestive issues.  I went to the doctor and I was told I had diabetes.  Weeks later, it was determined that I needed insulin.  Just as I was becoming devoted to my new healthy lifestyle, I became jaundiced and it wasn’t going away.  A couple of determined doctors knew something wasn’t right and refused to give up looking. 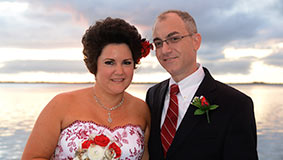 Extensive testing revealed a small lesion in the head of my pancreas that was blocking my bile duct and causing the jaundice.  At the time, I was told that 95% of times, a growth in the pancreas is a malignancy.  A subsequent biopsy determined that the growth was, in fact, malignant, but based on the preliminary staging of the cancer, I was probably one of the mere 20% of all men and women diagnosed with pancreatic cancer eligible for the only potentially curative treatment, surgery; specifically a Whipple procedure.

Less than two weeks later, I went in for my Whipple surgery.  It lasted eight-and-a-half hours.  The surgeon removed much of my pancreas, bile duct, stomach, intestines, and many of the surrounding lymph nodes.  I did have the cancer that is the most aggressive, ductal adenocarcinoma, but it had remained contained within the pancreas and was found not to have spread to any local or distant parts of my body, and was not in my local lymph nodes.

I had a lengthy and grueling recovery from surgery and eight months of chemotherapy and chemoradiation to contend with next.  With the help and love of my family, especially my amazing wife, my caring and knowledgeable medical professionals, and the positive news after surgery about my particular disease, I remained strong. I truly owe my life today to early diagnosis.  I know the key to ending this disease is researching and establishing reliable early detection methods and new treatment methods.  I also recommend living a healthy lifestyle and surrounding yourself with people you love.  I have been cancer free for two years.