In the spring of 2014, I was a 70-year-old engineering professor looking forward to retirement at the end of the year. In April, I started to experience abdominal discomfort across the bottom of my rib cage. At first I ignored it, but it became progressively worse. I also noticed I was losing weight. I saw a doctor at the end of June on a Thursday, and he suggested I get a CT scan, which I had on Friday morning. In the evening, the doctor called to say that the scan had revealed a “significant mass” on my pancreas. I asked if it was cancer, and he replied that there was a good possibility. My wife and I spent a tearful, anxious weekend together. 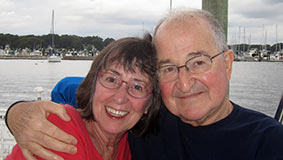 On Monday morning, things started to happen very fast. An appointment was made with a leading pancreatic surgeon for Tuesday afternoon. By 3:30 p.m. on Tuesday, we met with the medical team. The diagnosis was that I had a locally advanced tumor on the body of my pancreas. It was inoperable because of involvement with the celiac artery. Fortunately, there was no sign of any spreading to the lymph nodes or adjacent organs.

We discussed treatment options. I told the team I wanted the most aggressive therapy available, and I would fight this thing to the very end. Their suggestion was that we attempt to shrink the tumor with chemotherapy and radiation, and if successful, go to surgery to remove it. I agreed. The plan was to have eight chemotherapy infusions at two-week intervals, followed by 28 radiation therapy sessions with continuous low-dose chemotherapy.

Chemotherapy was not easy for me. I had read all the literature on side effects but was not prepared for the severity with which they hit me. Halfway through the chemotherapy, I had a set of CT scans to assess the progress. There were two findings. I had a small pulmonary embolism (PE) that required going on a blood thinner. But more importantly, some good news, my tumor had shrunk significantly!  My oncologist called it “remarkable!” My wife Marge and I were of course elated, because the tumor had pulled back from the celiac artery and was now operable. The next set of scans at the end of the chemotherapy showed another substantial reduction in size, as well as the scans following the radiation therapy.

In early February 2015, I had my surgery, a distal pancreatectomy (because of the tumor location) together with a splenectomy (removal of the spleen). When I awoke after the operation, the doctors reported that they found the tumor had shrunk to the point it was “microscopic.” In fact, the pathology report indicated that the maximum dimension of the tumor was less than 2 mm, down from the 28 mm at diagnosis! The margins were clear with no involvement of lymph nodes. And I have had post-operative scans that showed no evidence of cancer.

However, I had a difficult time with recovery from the surgery itself and was back in the hospital several times for numerous reasons. I lost 40 pounds after the operation and became very weak and fatigued. I have recovered slowly and feel much better eight months following the surgery. It was all a small price to pay for the privilege of being able to enjoy life again. The experience has made a different person out of me. I am resolved to live each day to the fullest and to make the most of time spent with family and friends.

I feel so lucky to be given a second chance at life. I am extremely grateful to my medical team, from the doctors to the nurses and staff who were always there for me. And words cannot express my love and thanks to my wonderful wife Marge who was at my side every step of the way through this journey.  Without her support, love and encouragement, it would have been a difficult and scary undertaking.