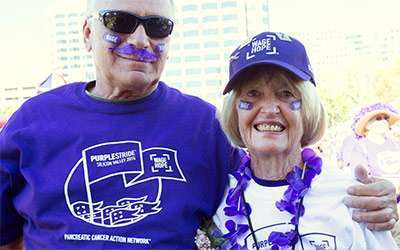 Diane and her friend Chuck Cheatham at PurpleStride Silicon Valley.

On August 8th 2016, I’ll celebrate the TENTH anniversary of my Whipple surgery! Here is my story.

I knew something was really wrong. My skin and eyes turned yellow. I immediately went to see my doctor to get some answers and I was diagnosed with pancreatic cancer. Prior to that, I had considered myself very healthy. I’ve always been physically active. I never smoked nor been overweight. I had recently had a little weight loss, but who wouldn’t welcome that? How and why had this deadly cancer attacked me? I was shocked.

Shortly thereafter, I was lucky to qualify for the Whipple procedure. I was also lucky to find a gifted, experienced surgeon at a high-volume pancreatic cancer hospital. This is an extremely important pairing as you evaluate your options. Some states maintain a public record of the number of major surgeries, including Whipple surgeries, which are performed in hospitals throughout the state. A PanCAN Patient Services Case Manager at the Pancreatic Cancer Action Network can help you with this. 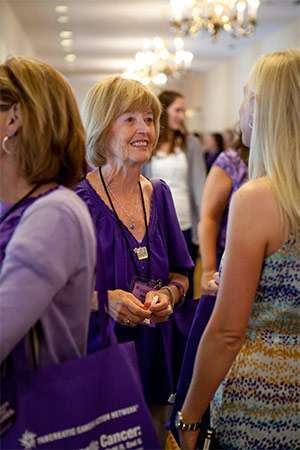 Within weeks of my surgery, I began six months of chemotherapy and for the next five years I was followed closely with blood tests and scans. And after that – nothing. I didn’t think I was “cured” because I know the monster can return. But for now, I am cancer-free.

During my cancer journey, my family and friends have been a source of enormous comfort, encouragement and support. I had my medical team and my cheering team, all with the single outlook that I would survive.

I remember lying in the hospital and wondering if I would be so fortunate to survive long enough so that my five grandchildren would remember me. Three of them were quite young. Today there are seven grandchildren, and the youngest is 9. I know I have had an impact on their lives.

In retrospect, at the time of my diagnosis ten years ago, there probably wasn’t much hope, even though my physicians insisted my outlook was good. But I have seen so much progress recently. If I were diagnosed today, I would strongly consider a clinical trial as part of my overall treatment decisions. Being able to say this with confidence supports the progress being made in the field of pancreatic cancer research. 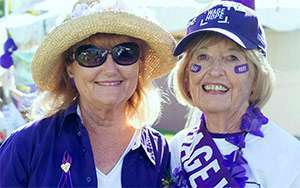 Diane (right) is the volunteer Advocacy Chair for the Silicon Valley Affiliate.

Today I am the Advocacy Chair for the Silicon Valley Affiliate and June 21 is National Pancreatic Cancer Advocacy Day. I’d like to emphasize the advocacy focus of the organization. In 2009, I attended my first Advocacy Day and listened as Rep. Anna Eshoo (D-CA) and former Rep. Ginny Brown-Waite (R-FL) shared their commitment to changing the future of the disease through their bill, “The Pancreatic Cancer Education and Research Act” (which became the Recalcitrant Cancer Research Act). There were 500 advocates in the room and when we went to Capitol Hill the next day we were on fire with the determination to see the bill become law! Unfortunately that did not happen before a new Congress took office, despite the thousands of emails and calls of support Congress received from our awesome volunteers. 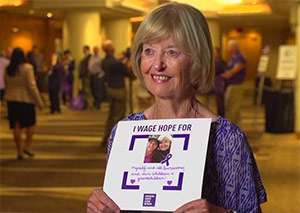 But Rep. Eshoo was not deterred, and neither were we. As soon as possible when the next session of Congress began, Rep. Eshoo and her colleague, Rep. Leonard Lance (R-NJ), reintroduced the bill. Working together as volunteers and with our legislators, the bill was passed by both houses in December 2012 and signed into law by President Obama in January 2013.  (Only 2 percent of the bills that were introduced in the 112th Congress became law by the end of that Congress).  And on a personal note, I was honored by being awarded “Advocacy Coordinator of the Year” at our national meeting in 2013 for my efforts that contributed, along with so many others, to getting the bill passed.  All of us volunteers felt that this disease would finally be given the attention it needed and the increased federal funding so urgently needed to fight on. 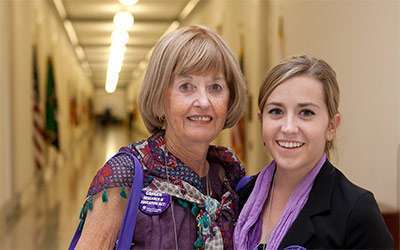 Diane at Advocacy Day with her granddaughter.

Thanks to the law, new research has been funded which will help us get to our 2020 goal to double survival. We have also continued to go to Washington, D.C., to talk with our legislators about the urgency for increased awareness and continued increased funding for research. Over the past 17 years, the advocacy efforts of Pancreatic Cancer Action Network have resulted in increasing federal funding for pancreatic cancer research to over $100 million, nearly a 500 percent increase. But we can’t stop here. This is still nowhere near where we need to be. And although we are making progress, we can’t ignore the fact that pancreatic cancer has recently moved from the fourth leading cause of cancer death to the third leading cause of cancer death, surpassing breast cancer.

This month, one of those grandchildren whom I feared might not remember me will be WITH me on Capitol Hill, learning how to advocate for our cause, telling her story, and talking to our representatives. Please join us and the estimated 700 advocates who will be on Capitol Hill by calling in to your own Senators and Representative on June 21 for the Pancreatic Cancer Action Network National Call-in.

Pancreatic cancer has empowered me. We must all choose our own ways to fight back and #WageHope.