This is a story of hope, faith, and miracles.  For more than six months I was experiencing the worst back pain in my middle back.  I had gone to my regular internal medicine doctor and was prescribed all kinds of pain meds…nothing even touched the pain!  Finally, my doctor requested an MRI -- which revealed a slightly bulging disk.  So, I did physical therapy, acupuncture, got adjustments from chiropractors, consulted holistic doctors, and finally a pain management doctor. 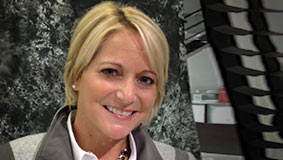 The pain simply got worse and worse.  I began to lose weight.  I wasn’t eating because I was so constipated and I assumed it was because of the medications I was on.  Finally, after four epidural shots that did not work, my pain doctor said, “I think you have a gut issue going on.”  So, I switched internal medicine doctors.

Along with blood work (which came out normal), the first thing he ordered was a CT scan.  The scan showed a very large tumor on my pancreas.  I was referred to a surgical oncologist who was unable to diagnose me -- biopsies revealed benign and then suspicious cells.  I was 42-years-old, had two wonderful little boys, a great career, an amazing husband, and I was in good shape and healthy besides this tumor!  At this point, my doctor wanted to do exploratory surgery; I thought a fishing trip in my body was not really a great idea, especially if they found cancer.  Finally, on January 5, 2012, I jumped on a plane to Tampa to visit an actual cancer center.  I had sent all my biopsy slides, scans, etc., and without any more testing, I was diagnosed with locally advanced pancreatic cancer.  As you can imagine, I was floored.  More tests revealed that the cancer had spread to my liver.  I was stage IV.  I was told that most people in my condition typically do not survive nine months.  However, my doctor told me, “It is not your prophecy; you are young, in good shape and you are probably BRCA2 positive and studies have shown that the chemotherapy you will be receiving works better in patients that are BRCA2 positive.”

My sister and mother were BRCA2 positive.  I never imagined I would be happy about having a gene mutation.  I began the first of 12 rounds of a combination chemotherapy regimen.  Then, 25 rounds of radiation with a 24-hour chemotherapy pump along with plant based supplements for the next nine months.  On October 4, 2012, with the grace of God, my scans revealed I had no active cancer.  I received a miracle.  In November of 2012, I traveled to Kentucky for a cutting edge “surgery” because my tumor was wrapped around an artery.  The surgeons went in; biopsied my liver lesions and they were benign so they continued with the surgery.  My gall bladder was removed.  Then, they performed this new procedure --  they took prongs and inserted them into the tumor (which was 2 cm) and shocked it.  This procedure is supposed to poke holes in all the cells and essentially they die and dissolve in your body over time.  Surgery was hard -- just as invasive as the Whipple.

I just had my latest scan and have been in remission (I call it cancer free) for a year now.  Here is the important part….I would not trade this crazy journey for anything!  From the beginning, I chose to make the decision to fight and beat this.  I was not going to leave my two boys (now in 2nd grade and 4th grade) and no one else was going to marry my husband!  I stopped reading the statistics and viewed myself as a statistic of one!  I assigned my sister the task of being my medical advocate and told her to tell me information only if I had to know it.  I found that people are amazing and I was lucky enough to have a ton of support from family, friends, and complete strangers.  I was even able to work full-time (having a home office helped immensely!).  I chose to stay super positive and as active as possible because my doctor told me that the chemotherapy would work better, and that if I stayed in bed, I would get weaker.  I eventually got weaker and weighed 92 pounds.  Trust me, I had other medical opinions and heard the words “you are going to die” too many times.  I chose not to listen and found the doctor willing to fight for me!  The biggest thing that happened was that my faith played a huge part in my healing.  I now have an amazing relationship with Jesus and I even grew up Jewish.  My journey was filled with miracles and “God stories” and I knew I was on this journey for a reason.  I know that God has a plan for me and he has a plan for you.  This cancer was a gift in a really strange package.  I am even writing a book about it because there is hope and it is my turn to pay it forward.