Growing up with a gastroenterologist father, I remember the phone calls where he would lock himself up in a room to later come out with tears on his face.  The calls where he advised his patients with newly found pancreatic cancer to write a will, travel the world and be around loved ones because soon they’d be passing on.  At the age of 31, when my gastroenterologist told me the news, I couldn’t help but to see that image in my head.  Though, thankfully, I didn’t get the normal “write your will” advice -- I got the names of phenomenal pancreatic oncology surgeons and was told, “It’s early enough; you’re going to be fine.” 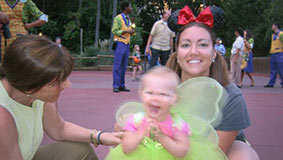 I had ended up in the emergency room after 24 hours of the worst stomach ache in my life.  It turns out I had very acute pancreatitis without any of the normal risk factors associated with it.  A CT scan and MRI later, they found a 2 cm mass growing in my pancreas and causing a kink in my pancreatic duct, which had caused me to get sick.  After a biopsy, the consensus was that I’d be fine if it was removed right away; I’m going to live to see my 40th birthday.  So, I’m missing over half my pancreas now and my spleen was an innocent victim.  I’ve got a second chance!

Every day I think -- “WOW.  AM I LUCKY OR WHAT?!?!”  I’m part of that 6% -- the lucky ones who find out early enough to be an exception.  More people deserve to get the phone call I did -- one full of hope and a plan.  The time is now to better understand the risk factors, early detection, and prevention.  One day, and I hope within my lifetime, my prognosis will be the norm.