I was diagnosed with pancreatic cancer in July, 2011.  I was playing tennis one day and noticed my urine turned dark.  After three days I went to the doctor’s office to have what I thought was a urinary tract infection treated.  A CT scan was ordered after an analysis of blood work.  The scan revealed a tumor on the tail of the pancreas.  My wife and I hit the ground running.  Doctor visits were quickly set up; additional scans, endoscopy, and biopsies were ordered.  A stent was placed in my biliary duct to keep it open to prevent the jaundice that was starting to spread.  An aggressive chemotherapy program was started that went on for five months.  During that time the electrical side of my heart went out of control.  I flat lined in the emergency room and was brought back to life with shock treatments.  I will never forget what my daughter whispered into my ear that night “there must be a reason that you were brought back.” 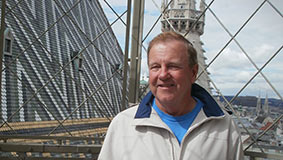 A month later a pacemaker/defibrillator was inserted as a safety measure to prevent future episodes.  After the tumor was showing no signs of shrinking, radiation and additional chemotherapy were ordered.  A month after my radiation treatment, bleeding in my stomach was detected and thought to be caused by the radiation.  It took two hospital visits to finally stop the bleeding.  I had additional follow-up scans that showed the tumor was not spreading and the surgeons made a decision to try to operate.  I had the Whipple attempted in December, 2012.  The operation failed!  The doctors discovered that the radiation treatment had fused the tumor to the major arteries of the pancreas.

Where am I now?  The tumor remains dormant and my tumor markers remain very low.  I have not had chemotherapy treatment done in 22 months.

How did I survive this journey?  My wife and my children were my caregivers and advocates.  They discovered the Pancreatic Cancer Action Network and were relentless in seeking out all options.  My network of neighbors, friends, and relatives were providing spiritual help along with driving me to numerous chemotherapy and radiation appointments.  My spirit and determination to fight on helped me to carry on.  This illness drove me to my knees physically and spiritually.  Never underestimate the power of prayer!  My support network was broad and the prayers for my recovery were flowing from everywhere.  My wife and I went to three pilgrimages overseas, to Lourdes and Medjugorje (twice) and have planned two more trips for 2014.  We are currently PurpleStride volunteers and have participated in two events with a third planned for this year.