I was originally diagnosed with neuroendocrine cancer of the duodenum in August, 2013.  I had a tumor that was bleeding, which caused me to collapse a month before my diagnosis.  This was the only symptom I had.  I felt great and was an active 40 year-old mom of three.  No worries…until this hit.  I live in a small town in northern Pennsylvania, and the nearest hospital is over 20 miles away and isn’t equipped to handle anything more than the small stuff.  I needed to travel one-and-a half-hours to a major hospital to get treatment. 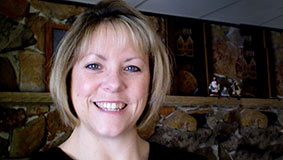 After many tests and scans, I was told that I actually had a form of pancreatic cancer and there was only one treatment option and that I had to be treated soon.  On September 18, 2013 I had the Whipple procedure done and had to stay in the hospital for eight days.  Upon leaving the hospital, I was told that “all margins are clear of cancer” and that I was okay to go home.

The road to recovery after that was a very, very hard road.  Today I am four months from surgery, feeling good and doing all the things I used to do.  I am so thankful to my husband who never left my side through all of this, to my three beautiful children and the extended family that surrounded me daily.  I am truly blessed and thankful to be able to live.  My future will be to have scans every six months to see if any of the cancer has returned.  My first scan will be this April.  In the meantime, I will continue to be on my knees in prayer, thanking God for giving me more time to love my family.