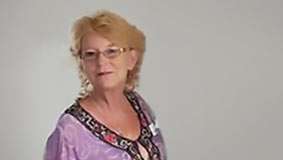 I am now a 9-year survivor of pancreatic adenocarcinoma – the fast growing kind of pancreatic cancer. But my life felt drastically threatened in September 2006 when I was diagnosed with a 4.5 cm tumor on the tail of my pancreas. I learned about it in a very unusual way, and I realize now that there were many “little miracles” that helped me along the way.

At the time, I was going about my life raising three children and a niece, working as a registered nurse and receiving treatment from a rheumatologist for what we thought was polymyalgia rheumatica. He had been treating my vague back pain for four months when I decided to go to a gynecologist for a checkup.

This was my first miracle: scheduling an appointment with a new gynecologist and then seeing him just a few hours later. Something in his gut told him to draw blood and check my CA 19-9 level (a tumor marker blood test); this was my second miracle. My CA 19-9 level was elevated to an abnormally high 3,500. I saw my primary care physician that same day, had a CT scan, and got the results within a few hours.

The following day, I saw an oncologist and was informed that I could be a surgical candidate if my tumor shrank through chemotherapy. For four months, I underwent an aggressive chemotherapy regimen. Then I was able to have a modified surgery to remove the tail and mid-body of my pancreas, left kidney, adrenal gland and spleen. Recovery was long – lasting five months, followed by chemoradiation.

After the chemoradiation, I went back on the original chemotherapy regimen for five more months until my CA 19-9 level jumped from 12 to 12,800 in January 2008, and a PET scan showed a liver metastasis. Fortunately, three treatments of radiosurgery annihilated that tumor.

Then I started a new chemotherapy regimen for a few months before I began taking a targeted therapy drug until December 2009. A PET scan showed a small lung metastasis, which was treated with radiosurgery.

I have not been on any treatment since January 2010. I still get my port flushed and labs (including CA 19-9) drawn every six weeks, plus a PET scan once a year.

When I was first diagnosed, my family and friends gathered around me and everyone was assigned a role. They got me through those first three years when I was undergoing rigorous treatment. I had a fabulous support system and a positive attitude, which was very important. I just knew I couldn’t die at that time because I wasn’t finished raising my children yet. Since then, I have been able to celebrate graduations, holidays and birthdays that not many people thought I would live to see. When people ask me if I wonder, “Why me?” I answer, “Why NOT me?”

Living after a diagnosis of pancreatic cancer means that one’s “normal” has changed, and the gift is the ability to give back for all that you have received. I am very thankful to my family, friends and doctors for their continued love and support.

My life as a survivor has been very sweet. I’ve witnessed two of my three children get married. I have been able to welcome a now 9-year old grandson into my family. I’ve watched my third child graduate and complete her master’s degree at the University of Tel Aviv, and my niece graduate from college and begin her life post-graduation.

Residual effects remain from all the intense treatments, and each one has to be dealt with. But these are really just inconveniences in the grand scheme of things. They remind me to value each day, because we never know when our time here is going to be finished. I look at my Facebook groups as a Pancreatic Cancer Action Network volunteer and realize that I have lost too many friends to this terrible cancer. I hope to be able to continue to be a voice for those we have lost and for those just starting this hard-won journey.