I have always been a person who likes to do things for myself. I love to hike, backpack, kayak and bike ride. Even in my work – I work independently throughout the mid-Atlantic region servicing various accounts. I have always been able to confront a situation, develop a plan, initiate that plan and solve the problem without much help from others. In 2010, all that changed with a simple slight pain in my right side. 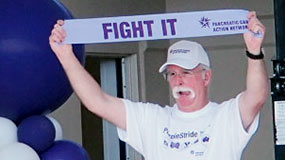 My doctor told me to lay off fried foods, thinking the pain was probably my gallbladder. That worked for a while. The pain came and went. Then it stayed a little longer each time until finally it became a BIG pain and would not leave. Eventually I turned a nice shade of yellow, and my urine looked like dark soda. I finally gave in and went to the local walk–in clinic.

When the doctor saw, me he was visibly shaken. He simply said, “You need to get to the hospital.” When I agreed to go later in the week his reply was, “NO – right now. I’ll make the call.” At that point, I knew my care was in the hands of others.

At the hospital, a gastroenterologist was called in. He performed an endoscopic procedure and found the tumor. It had formed around the common bile duct, right where the bile duct, pancreas and intestine come together. The tumor had closed off the bile duct and caused my system to back up. The doctor placed a stent to open the blockage and get my system moving again. But during the process, my pancreas was irritated, and I developed pancreatitis.

The doctor told me I needed immediate surgery, but because of the pancreatitis it would have to wait. He also made arrangements for me to go to a high volume pancreatic cancer hospital because the location of the tumor was so unique and uncommon. At this point, I knew the race was on and the trail would be steep. I was peddling into a strong headwind.

For the next 35 days, I did not eat anything. A pic-line was installed, and I lived off of TPN. I lost 35 to 40 pounds. The doctors did many tests. They set up a game plan and worked overtime to implement it. My fate was not in my own hands but in the hands of others.

Despite that, I was still optimistic. Many people were behind me. They had formed a “safety net” of support. My family, my church, co–workers and friends – all were helping me through this. On November 3, 2010, I was finally able to have the surgery I needed – the Whipple. From January to October 2011, I received follow up treatment – chemotherapy, radiation with chemotherapy and then more chemotherapy. Through it all, I came to deeply depend on others.

Prayer, words of encouragement, acts of kindness…all of it helped. Without my “safety net,” I never would have pulled through. Support was critical.

Recovery was slow but steady. Each checkup was promising. My strength and weight slowly came back. Activities I enjoyed became achievable on a smaller scale – walks instead of hikes and short bike rides over long trips. Most importantly, I understood that allowing myself to depend on the honest and sincere support of others enabled me to accomplish goals that seemed impossible.

One bit of advice a nurse gave me while I was recovering from surgery that I always remembered and applied was to focus on the task at hand. Don’t worry about the whole problem. It’s too big! Just solve the task at hand, move to the next one, solve it and continue to move forward. When you do that, the pieces will come together and the whole problem will be solved, like putting a puzzle together.

Going through this experience, I have learned two things. First, the “safety net” was not only crucial, but it was much larger than I had envisioned. Not only did it include my family, my church and co–workers, it also included my doctors, nurses and oncologists, as well as researchers, volunteers and many others I have never met. All willing to work overtime to help ME and to help YOU!

The second thing I learned was that when we all come together and focus our resources, talents and time on a common issue, even a problem as devastating as this insidious disease can be overcome. We can do it by taking on one task at a time until the whole problem is solved and the puzzle is complete.

The trail is steep. The headwinds are strong. The uphill peddle may seem endless. But by working together, we can assemble the pieces of the puzzle to form the whole picture and cure this disease.