In May of 1992 I was 15 years old and I had been having stomach pain for about one week. My doctor told my mom that I probably was just making it up because I didn’t want to go to school. My mom didn’t like that answer, not to mention the fact that all I had been doing for the entire week was sleeping and taking pain medication. The medication made me sleep more and the pain was getting worse, not better. I finally was sent to have an ultrasound and to see a specialist. 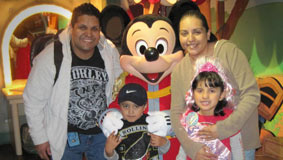 The specialist then called to get the results of the ultrasound over the phone and then told my mother to take me straight to the hospital for further testing and consultation with a surgeon. The ultrasound showed a growth which was causing the pain and also blocking my bile duct, which also explained the fact that I was starting to become jaundiced.

I had surgery to make me more comfortable, since the surgeon was unable to remove my tumor due to the fact that it was wrapped around the portal vein. The doctors told my mom to take me home and make me comfortable and gave me six months to live. I thank God for my mom every day. She is a fighter and she fought for me; she called everywhere she could and spoke to many, many different specialists. At that time, pancreatic cancer was very rare and there were not that many cases, especially patients that were my age. We finally found a surgeon at a hospital in Pittsburgh, Pennsylvania. We lived in Pasadena, California, so we flew out to Pittsburgh and I had surgery the next day. It was a 16 hour surgery and I thank God for everyone on the transplant team that worked on me along with my savior, my doctor. I don’t know where I would be without them, my mom and also my guardian angel, whom performed my first surgery, personally escorted me to Pittsburg, and was there by my side in surgery. I am truly blessed to be in remission for 19 years now. I am a wife and a mother of two. Never give up hope and keep fighting. Life is really worth it.