I’m a 25 year survivor.  At the age of 33, in July, 1988, my gallbladder was removed.  My bile duct was blocked due to swelling in the head of the pancreas, which the doctors told me was normal with gallstones (sand in my case).  In order to relieve the blockage, the doctor inserted a tube that allowed the blocked bile to drain into a bag outside of my body.  I was told that the swelling would go down in a week or so, at which time they would remove the tube. 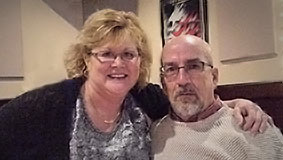 Seven weeks later, the bile duct had not opened; I had lost 43 pounds and was down to 123 pounds.  I was sent to my local medical center for three days of testing.  The doctors found an almond-sized tumor in the head of my pancreas that was pushing against the bile duct.  I was informed that without surgery, I would not live two weeks.  I was given less than a 10 percent chance of surviving surgery and if I did survive the surgery, I would live a maximum of 90 days, but not to expect to live that long.  My wife and I discussed the options and I elected to have the surgery.

Guess what?  I survived it.  They removed half of my pancreas, half of my stomach, and my duodenum.  I then underwent both chemotherapy and radiation therapy.  Nineteen days after I was admitted to the hospital, I was released and told to enjoy the remaining days that I had.

Well, even after 25 years, my wife and I still enjoy each day as if it were the last we will be together.  On Tuesday, October 29th, we celebrated my 59th birthday.  I praise the surgeon both for his steady hands during surgery and for his support for both my wife and me during the entire process of recovery.  No matter how dire the prognosis, PEOPLE SHOULD NEVER GIVE UP.  I’m living proof.