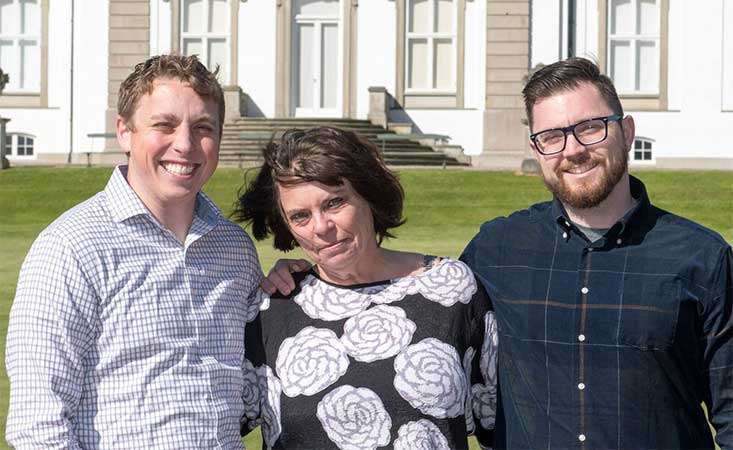 I have always been fortunate with my health; never really had any serious issues to speak of. I was athletic and somewhat healthy from my 30s up to the day I was given a dreadful diagnosis: pancreatic cancer stage IV, metastasized to my left ovary, with a tumor measuring 15 x 3 centimeters and weighing in at almost 2 kilograms.

How did this come to be? I had experienced various stomach symptoms like heartburn, constipation and light gallstone attacks for a period of a year. Each incident left as quickly as it arrived; no further investigation was ever pursued.

My story is a testament of hope and endless perseverance – something I did not possess, but my son Jonathan did and passed on to me.

I am from Denmark. I had lived in America for most of my adult life, and in 2008 I returned home after 25 years.

At the time I worked at a rehabilitation center caring for late-onset brain traumas. I was doing an evening shift with my favorite colleague. I kept telling her I had severe stomach pain. It came and went, and with the morbid sense of humor that we shared, I told her I most likely had a colossal tumor in my stomach and she should stop laughing at me. Little did I know.

I ended up in the emergency room Monday morning. I will spare you the details of my poor case management, which ended with a laparoscopy at midnight. They thought I had appendicitis and never bothered to scan me. With my luck they stabbed the large metastasis and had to open me up in a hurry. I was transferred to another hospital in the middle of the night. The hospital did not have a doctor that could remove the tumor, so within 12 hours, I had two intense and complicated surgeries.

A scan showed a tumor on my pancreas, a walnut-sized growth that sat in the middle of the organ. Pathology from metastasis confirmed pancreas cancer as the original cancer. They had nothing to offer me other than palliative chemotherapy. They told me I was not operable and referred me to an oncologist.

I received 11 rounds of intense chemotherapy. In the fall of 2017, I switched to a somewhat milder chemo. It was taking a toll on me: I was in and out of the hospital, my bloodwork bottomed out constantly, chemo was killing me. I prepared to die, wrote my last will and testament, arranged for my funeral and wrote letters to people who had made a difference in my life.

My children are Americans, and my youngest was then attending physician assistant school in Denver, Colorado. He sought out an oncologist, and I flew to Colorado in March 2018.

My son found a physician that believed in me; he gave me hope from day one. He was so motivated to help me that I started to believe I might not have to die right away. We did scans and a biopsy of my tumor, and he consulted a surgical team who was willing to see me.

On July 6th, 2018, I told my boys how much I loved them before I was wheeled in to the surgical suite. The surgical team worked on me for seven hours, mostly to repair old scarring from my previous surgeries, but also to successfully remove the tumor from my pancreas, along with my spleen.

I have been told that a biopsy showed that I have a rare mutation in my pancreas cancer. I am one of the lucky ones, and I am so grateful for my son and his curiosity to pursue help for me in the U.S.